In the Winter of 1861-62, the folks in Memphis were busy building two new Confederate rams, the Tennessee and the Arkansas. In April of ’62, the Arkansas was moved up the Yazoo River, after the Yankees raided Memphis and sank the Tennessee before she could escape.
Captain Isaac Brown received his orders to take command of the Arkansas and see her construction completed later that year, but when he arrived in Greenwood, Mississippi, what he found was a mere hull. It had no armor. The engines were in pieces and the guns had no carriages. The railroad iron that was meant to armor her was lying in the mud at the bottom of the Yazoo.  In order to complete her construction he had her towed up to Yazoo City, where army construction crews worked for 5 weeks to.. ahem…. Gitter Done. The work was nearly complete when falling river levels forced them to move the Arkansas yet again.  At that point she was ready to go, except for the one armorless curved spot that wrapped her stern and pilothouse. They slapped a boiler plate on there for “appearances’ sake”, and set off to kick some ass.
That was a pretty cocky attitude for a Confederate Captain to have. Particularly one whose crew was made of 60 boys from Missouri who’d mostly never been on a ship before. Not to mention the fact that none of them had ever been around the big guns of the Arkansas. Then again… You put a big enough bow gun on a boat, and you end up with a confident captain, and the Arkansas had… well… it wasn’t so much a gun as it was an instrument of mass maritime destruction. Less than 24 hours after setting off, they’d have a chance to put her to use.
At dawn, three Yankee ships were sighted coming straight toward her.  The Tyler, a wooden gunship, the ironclad Carondolet, and the Ram Queen of the West were the first three ships to take on the Arkansas. The Tyler, frankly, had no business being there. Her captain showed guts, though.  He stayed out of the fight, but close enough to fire on the Arkansas when he got the chance. A reasonable man would’ve run like hell.  Captain Brown rightfully ignored the Tyler and concentrated on the Carondolet. The big bow gun blasted her steering mechanism to hell and gone, and she was left stranded on a sandbar. When the Arkansas turned her attention to the Ram and the Tyler, both turned and ran. Brown could’ve returned and finished the helpless Carondolet, but instead he continued to chase the other two.
It was this chase that quickly led the Arkansas to Vicksburg… and legend.  The Union had been laying siege to Vicksburg and had assembled what was, at the time, the largest naval force in the history of the Western Hemisphere. There were 40 ships. A forest of sails and smokestacks.  In one of the great “Holy Craps” of our history, Captain Brown simply looked at that big bow gun and decided to blast right through. Hell, there was only 40 of ’em. Suffice it to say this was exactly what the Yankees did not expect.  In fact, by the time most of the Yankee sailors even realized what was going on, the Arkansas was already blasting away on them. It was like Pearl Harbor, except it was just one boat attacking.
That’s not to say that the Arkansas didn’t get punished. Witnesses from Vicksburg at first thought that a Yankee powder boat had blown up. There were explosions everywhere, and black smoke too thick to see through. The Arkansas plowed through the force, firing on, and taking fire from, every ship she passed.  The fury and sudden nature of her attack aided her greatly. Of all the Yankee ships, only the ram, the General Bragg, had steam, and her cowardly captain did nothing. Later he claimed he was “waiting for orders”. I’m sure he was waiting for orders… in his quarters, under his bed. 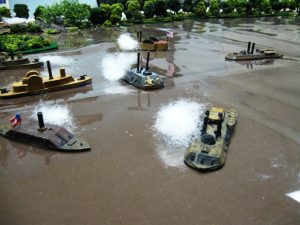 In the boldest Yankee move of the battle, the Lancaster, another ram, made a grand move on the Arkansas, attempting to position itself between her and Vicksburg, but all she got for her bravery was a blast from the big bow gun that ruined her and killed many of her crew. Colonel Scharf says in his history: “The Federal line was now forced, and the Arkansas emerged from the volcano of flame and smoke, from an hour’s horizontal iron hail of every description, from 32 to 200 pounders, hurled by a fleet of about forty formidable war vessels–shattered, bleeding, triumphant! … They were welcomed by the patriotic shouts of the army at Vicksburg, and the siege of that city was virtually raised.”  That last bit is debatable. The New York Times placed Yankee dead at 42, with 70 wounded.
For the next week, the Arkansas stayed in port at Vicksburg where she was repaired, all the while under fire from the Yankee fleet that was little more than an annoyance.  Once the repairs were complete, Captain Brown decided to once again lay into the Yankee fleet. By maneuvering around under the guns of Vicksburg, he was able to harass the fleet to no end. They were forced to be continually under steam, which in this, the hottest part of the summer, was bloody misery. Admiral Farragut, who was already hot enough about the success of the Arkansas’ raid, had had enough. He ordered her sunk before they all died of heat stroke.
In a last ditch effort, Farragut called out the Essex, a formidable ironclad, and the Queen of the West. Both were ordered to ram the Arkansas.  This lead to a running knife fight of a battle, so close that some of the sailors on the Arkansas actually came away with powder burns from the Yankee guns. The Essex eventually took a point-blank broadside to her stern. She drifted away, helpless. One on one, the Queen of the West knew she was out-matched, but she fought on valiantly, until she to fell to a broadside… and then a shot from the big bow gun.
Both Yankee boats were towed away, and in view of this defeat, the Yankees had no choice but to end the blockade. The greatest naval force in the Western Hemisphere had been scattered by one boat. A boat built in a swamp, with scrap metal, and crewed by a bunch of wet-behind-the-ears volunteers, of whom only 20 now survived. Take away all the hyperbole, and even from the Yankee point of view, it’s still one of the greatest feats in naval history.
Four months later, the Arkansas was ordered to aid in the attack on Baton Rouge, without her dear captain. Brown was being treated medically, but when he heard about the orders, against doctor’s orders, he left the hospital. He caught a train to try to meet up with the Arkansas before she left, but arrived 12 hours too late.
Within sight of the battle, the Arkansas’ engines failed her. Rather than see the Yankees get her, they landed her, and with St. Andrew’s Bloody Cross flying proudly over her guns, they fired her.  She exploded with her flags still flying.
So ended the CSS Arkansas, the most valiant ship to ever sail.

In the Land Where We Were Dreaming