Editor’s Note: This week, rather than a traditional sermon, we are presenting an early Christian Witness (St. John of Damascus, who died in 749 AD) who gave his thoughts on the rise of Islam and what it meant. Rather than copy the entire article, I will provide the first few paragraphs, and then link to the original source at the end of the excerpt.  You can read it all there, as well as a brief bio of St. John of Damascus.

And there is also the up until now strong and people-deceiving superstition of the Ishmaelites, being the forerunner of Antichrist. And it is born from Ishmael, who was born from Hagar to Abraham, from which they are called Hagarenes and Ishmaelites. And they call them Saracens, as from Σαρρας κενοι (those empty of Sarah), because of what was said by Hagar to the angel: “Sarah has sent me away empty.” So then, these were idolaters and reverenced the morning star and Aphrodite, who they indeed named Khabar in their own language, which means great. Therefore, until the time of Heraclius, they were plainly idolaters. From that time and until now came up among them a false prophet called Mamed, who, having encountered the Old and New Testament, as it seems, having conversed with an Arian monk, he put together his own heresy. And under the pretext of seeming pious, attracting (?) people, he reported that a book was sent down to him from heaven by God. Therefore some of the compositions written by him in a book, worthy of laughter, which he handed down to them as an object of reverence. 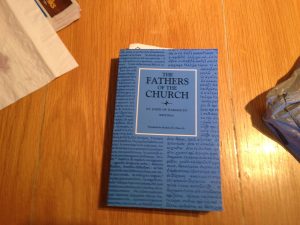 He says there is one God, the Maker of all things, neither having been begotten nor having begotten. He says Christ is the Word of God and His Spirit, only a creation and servant, and that he was born without seed from Mary the sister of Moses and Aaron. For he says the Word of God and the Spirit went into Mary and she bore Jesus who was a prophet and servant of God. And that the Jews, acting against the law, wanted to crucify him and having seized (him), they crucified his shadow. For Christ himself, they say, was not crucified nor did he die, for God took him to himself into heaven because he loved him.
And he says this, that when Christ went up into the heavens, God questioned him, saying, “O Jesus, did you say that ‘I am the Son of God and God’?” And Jesus, they say, answered, “Have mercy on me, O Lord; you know that I did not say (that), nor am I too proud to be your servant, but men who have turned aside wrote that I said this word and lied about me, and are wandering.” And God, they say, answered him, “I know that you did not say this word.” And many other astonishing sayings in this same writing, worthy of laughter, he boasts God sent down to him.
But we say, “And who is the witness that God gave the writing to him, or which of the prophets foretold that such a prophet would arise?” And they are at a loss, as Moses received on Mount Sinai, in the sight of all the people, the Law of God who appeared in cloud and fire and darkness and storm. And that all the prophets, from Moses and onward, foretold the coming of Christ, and that Christ is God, and the Son of God, being flesh, will come, and will be crucified, and will die, and will rise again, and he will be the judge of the living and the dead. And we say, “Why did your prophet not come in this way, with others witnessing about him, nor coming among you as God gave the Law to Moses on a smoking mountain with all the people watching, and, as you claim, provide this book, so you also might have certainty?” They answer that God does as he wills. We know this too, we say. But, we ask, how did the writing come down to your prophet? And they answer that while he was asleep the writing came upon him. And we jokingly say to them that since he received the writing while sleeping, and did not sense the activity, in him is fulfilled the popular proverb (“You are spinning me dreams”).

Read the entire thing here at the source, Biblicalia.