The Anglo-Saxon Chronicle was initially compiled, at least according to historical tradition, when King Alfred desired to improve the educational level of his subjects, especially in history, literature, and religion. Since Alfred reigned in the late ninth century, and the chronicle begins before the birth of Christ, it is obvious that the initial compilation was of written accounts now lost to modern scholarship, coupled with the oral tradition of the day (Treharne, p. 20). Many of these early entries are very succinct and lacking in descriptive detail that is more common in later entries. The Anglo-Saxon Chronicle­ is one of the great historical records of the history of the British Isles, reaching far enough into the past that myth and reality are often intermingled. With the migration of the Germanic tribes into Britain, the previous inhabitants were pushed to the extremities of the islands. The Anglo-Saxons who came to dominate the region brought their own ethnic identity with them, but it soon began to change, for both environmental and religious reasons. The Chronicle clearly shows that the Anglo-Saxon people desired to maintain a deep connection to their past, yet also desired to highlight their deep connection to their newfound religion – Christianity. From Alfred’s time to the end of the Chronicle, the entries are made by contemporaries of the events who set down the major historical events as perceived by the writer. The earlier entries serve as a connection between the mythical past and the contemporary time period. Eventually, the Chronicle served as a source for the development of modern British Identity, and the term “Anglo-Saxon” is still commonly used to refer to people of British extraction. By the time the Chronicle was begun, the writers had already developed some sense of a social identity, especially as it differed from the people who had inhabited the British Isles previously (Welsh, Scots, Picts, etc.). The first entry, a brief description of the “Island of Britain” refers to these other people groups in the third person, acknowledging the difference between them and the Anglo-Saxon writers.

As previously mentioned, continuity with the past is of paramount importance to the writers of this work. They strove to show that they were not isolated pilgrims, bent on conquering new lands, but were in fact the heirs of a great Germanic heritage. Archeology also confirms this, as many early Anglo-Saxon burials sites were constructed upon earlier monuments from the pagan past. Howard Williams wonders if “by burying the dead in, or close to, ancient monuments, could the Anglo-Saxons have been constructing social identities, myths of origin and relations with the distant past?” (p. 91). He convincingly argues that this was exactly the case. For those Germanic immigrants, the use of older monuments could portray them as the legitimate heirs of the ancient people, or even tie them to “memories of imagined homelands” that had been left behind (Williams, p. 104). Williams goes on to say that the narratives of The Anglo-Saxon Chronicle, while not truly historical accounts, associate these burial places with battles and graves of heroes, further solidifying the connection to the past (p. 103). In any event, these burial practices coincide with the time period of the writing of The Anglo-Saxon Chronicle and indicate that the people of that time were concerned with their past and present identity, working to construct a new ethnic and political identity. The concept of continuity permeates the Chronicle, both in genealogies, descriptions of locations, and in intentional connections to past events, both implicit and explicit. 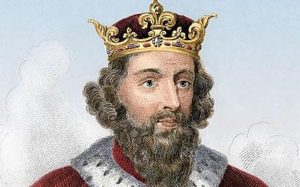 The idea of family was important to the people in this time period. The concept of lineage was a major concern, as it established inheritance, family heritage, and even rulership (in the case of nobles). The Chronicle is replete with lists of ancestors, showing that rulers are descended from great warriors or other popular public figures. In a clear case of the line between myth and reality being blurred, the father of all Anglo-Saxon royalty was proclaimed to be Woden, the Norse God: “Their leaders were two brothers, Hengest and Horsa; who were the sons of Wihtgils; Wihtgils was the son of Witta, Witta of Wecta, Wecta of Woden. From this Woden arose all our royal kindred…” (entry for AD 449). While not all entries claim to connect mythical past to present in such stark terms, it is clear that to the people of this time, such a connection was desirable and totally within the realm of possibility.

Two major aspects of physical connection to the past, genealogies and burial customs, indicate that these new immigrants were zealous to maintain their historical heritage, while at the same time establishing a new social identity. This continuity served to establish the “social and ethnic identities within and between early Anglo-Saxon communities” (Williams, p. 103). One of the major ways that they made a break from the past was in their religion. While they still made claims to be descended from Woden, by the time the Chronicle was begun in earnest, the Anglo-Saxon people were predominantly Christian. In fact, that was one of King Alfred’s main goals – to educate his people about their Christianity. Accordingly, the Chroniclers of this work went to great pains to establish a clear connection to the Christian Church, specifically the Church in Rome. While the first entry in the Chronicle concerns the physical description of the Island, the vast majority of the entries for the first four centuries are concerned with Rome and/or Christianity. Brief accounts of the life of Christ (who assuredly did not visit Britain), the start of the Church, and Roman historical events are the major focus of this time period. One should consider why these ninth century Anglo-Saxons would begin the history of their island nation with the reign of Julius Ceasar and the birth of Christ. It is apparent that they are establishing a tie to their Christian heritage, especially in relation to Rome.

In fact, the first entry that truly concerns the Anglo-Saxon people refers to the martyrdom of St. Alban in AD 283. Many entries intermingle the secular and religious, with both kings and abbots serving prominent roles. The Roman Pontiff is also frequently mentioned, since he was considered the master of their religious identity, just as the king was of their political. The connection between Rome and Britain was highlighted by the entry for AD 596, with the seeming innocuous statement that “This year Pope Gregory sent Augustine to Britain with very many monks, to preach the word of God to the English people.” Of course, this was in fact the beginning of a growing connection between the two. It was the logical result of the Anglo-Saxons “associating themselves with powerful forces… to legitimize political strategies in the present” (Williams, p. 103). The mingling of secular and religious is seen in entries such as that for AD 607: “This year Ceolwulf fought with the South-Saxons. And Ethelfrith led his army to Chester; where he slew an innumerable host of the Welsh; and so was fulfilled the prophecy of Augustine, wherein he saith “If the Welsh will not have peace with us, they shall perish at the hands of the Saxons.” The relationship between the heroic pagan past and the Christian present is evident in the identity of the people.

The majority of this discussion has focused upon the first portion of the Chronicle, which was compiled from previously written accounts and oral tradition. By the late ninth century and to the end of the Chronicle, the accounts become more detailed and historical in nature, as the social identity of the Anglo-Saxons became more defined. The latter portion, while making up the bulk of the text, is the logical result of the earlier portion. When the ninth century writers added the content from the past, it seems that they were attempting to define who they were as a people – the descendants of Germanic heroes who had conquered a wild land, subjugated inferior people, adopted the true religion, and lived out the ethical and moral ideals of that heritage. In addition, The relationship between the kings and the people was much more intimate than we normally expect today. In fact, The Anglo-Saxon Chronicle focuses upon this personal relationship, highlighting another key aspect of Anglo-Saxon society – the rulers and people coexist in a fairly intimate symbiosis. Renee Trilling, referring to the work by Alice Sheppard, points out that “historical and national identity are thus intertwined…the national character must depend, to some degree, on the ruler who instituted it” (p. 390). This leads to the conclusion that this lordship/commoner relationship is foundational to the Chronicle’s presentation of Anglo-Saxon identity.

Of course, the turmoil that occurred in AD 1066, when William the Bastard conquered the last Anglo-Saxon king, Harald, at the Battle of Hastings, led to a major disruption, in both Anglo-Saxon society and identity, as well as in the entries into the Chronicle. While great detail is taken to enter detailed data, the entries belie the loss of the intimacy between the rulers and the people, as the Normans ruled and the Anglo-Saxons were subjugated. Likewise, the language changed, as later entries, while still in Anglo-Saxon (Old English), begin to favor Middle English. Specifically, the Peterborough Chronicle (one of the surviving manuscripts from with The Anglo-Saxon Chronicle is compiled) provides important linguistic evidence for the time period after William’s conquest and the fourteenth century, showing the transition from the Anglo-Saxon period to the Anglo-Norman. The Norman Conquest introduced “new aristocratic pressures and new concepts of law” (Brooks, p. 214). The writers of the Chronicle became politically adept, appeasing the monarch by referring to the “twentieth year after William began to govern and direct England, as God granted him” indicating that God had blessed William (AD 1087). Yet immediately after his death, William was referred to as “very harsh and severe over his land and his men, and with all his neighbours; and very formidable; and through the counsels of evil men, that to him were always agreeable, and through his own avarice, he was ever tiring this nation with an army, and with unjust contributions. For in his days all right fell to the ground” (AD 1100). According to Trilling, the Norman Conquest resulted in the foreclosure of “any return to the discourses of identity and ideal lordship articulated earlier” in the Chronicle (p. 391).

In the final analysis, The Anglo-Saxon Chronicle is a vital book for understanding the history, the people, the religion, and the politics of early Anglo-Saxon Britain. Readers are able to see that the people desired to developed a deep continuity with the past, both in physical lineage and in religion, though their chosen religion was adopted from the Romans. Whether it was claiming descent from Norse gods, or religious heritage from Christ and the Apostles, the Anglo-Saxons quickly developed a unique mythos to define themselves. They were a warlike, conquering people, who looked toward Rome for religious guidance. The people and the government existed on intimate terms, at least after the time of Alfred and until the Norman invasion of 1066. Most of the events that occurred in this time period are only known to modern readers because of this seminal work. The brief entries of the first four centuries are mainly intended to connect the former pagans to their Christian roots, while the entries in the fifth to eighth centuries, while still including Christian content, contribute content about their physical heritage from Germanic tribes. These things all come together in Alfred’s time, when the Chronicle was begun, and Christianity and Germanic heritage fused to form Anglo-Saxon culture.

So you bought your first handgun, now what?