If you try really hard, you might remember the “squishy” Republicans of yesteryear. In fact, it is not even hard, to be honest, since it was only months (at most a couple of years) ago that this described the majority of Republicans in Washington, who had sold their souls for a mess of leftist pottage.

Consider this smattering of Republican characterizations of President Trump in 2016:

“Donald Trump has not demonstrated that temperament or strength of character. He has not displayed a respect for the Constitution. And, he is not a consistent conservative. These are all reasons why I cannot support his candidacy.” – Jeb! (Please Clap)

“I just really believe that the Republican Party has been conned here, and this guy is not a reliable conservative Republican.” – Sen. Lindsey Graham (SC)

“With a bumper sticker approach to policy, his bombastic tone reflects the traits of a bully, not an American president and statesman. If he cannot unite Republicans, how can he unite America? I simply cannot endorse him.” – Tom Ridge (Former PA Governor)

“DJT is a malignant clown – unprepared and unfit to be president of the United States.” + “.@realDonaldTrump should drop out. @GOP should engage rules for emergency replacement.” – Sen. Mark Kirk (IL)

You get the picture. That is just a few of the anti-Trump comments made from people within his own party. Now, without a doubt, there were many others who did say that while he was not their first choice, they would support the party’s nominee in the election, but even those 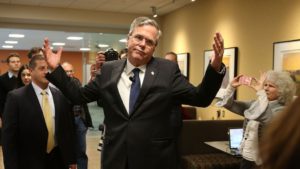 endorsements were backhanded and lacked any real strength. It was only a very few who truly supported him – until he won. (And admittedly, there are still many within the Republican ranks that continue to kick against the goads).

Now, why would they have not given him their undivided support, when the alternative was the disastrous prospect of a Hillary Clinton presidency? It is simple, really. They are all part of the same establishment. The difference had shrunk to nearly nothing between Republican and Democrat within the  halls of power.

That is not to say that on Main Street, USA, there was no difference, of course. Those who voted for the Republicans and those who voted for Democrats have remained fairly far apart from one another, ideologically. In Congress, though, that difference evaporated post-Reagan (and the process had begun long before).

Yet, the unthinkable happened. Trump won. He became President, and rather than kowtowing to pressure from his Republican 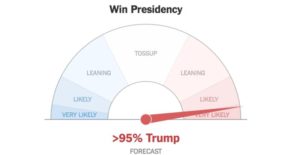 “compatriots,” he blew the whole political machine up, and I am not the only one who has noticed this. If you don’t like what Trump says, he doesn’t care. If you don’t like the way he operates, tough. He does things his own way, regardless of what Republicans, Democrats, or Independents think about his methods and aims. He does what he thinks is right.

Sure, he makes mistakes, but he also learns from them. One thing he does not do, however, is allow Washington to return to the pre-Trump era. He is forcibly moving the Republicans back to their roots, whether they like it or not.

Some have fallen by the wayside (see the Bush family as an example). Others, though, have seen where this trend is going, and for whatever reason, have jumped on board the Trump Train. Are they truly buying into what President Trump is selling? I have no idea. What I do know is that they are no longer fighting with him about his agenda, but are working to implement it.

All we have to do is look at the change that has taken place with some of these same folks who ridiculed Trump just two years ago. Notice how their mannerisms, focus, confidence, and yes, even their manliness has changed for the better:

“…..finally thank you President @realDonaldTrump for the good judgment in selecting Judge Kavanaugh and the toughness and determination to stick by his side and see it through to Victory!” – Sen.Lindsey Graham (SC)

“When the fighting was over, York had single-handedly eliminated 35 machine guns, killed more than 20 Germans and taken 132 members of a Prussian Guards regiment as prisoners. A modest man, York shrugged off his heroic actions, saying, ‘It’s over; let’s forget it.'” – Sen. John Cornyn (TX), referring to Sgt. Alvin York

“Rhetoric vs. Results: Pres. Obama said “the true engine of job creation in this country will always be America’s businesses.” But his administration set two all-time records for pages in the Federal Register, including many burdensome regulations that tied job creators’ hands.” – Senate Majority Leader Mitch McConnell

Again, this is a small sampling, but you see manhood and strength presented, where not so long ago, we saw weakness and capitulation. Note how former opponents of the President are now pointing to his policies and direction, while others are simply highlighting real manliness. These are all good things that have been noticeably missing for a long time.

So what is the difference? For some, it is probably political expediency. They think that they can ride on Trump’s coattails. Perhaps they are right. Some have probably realized that Trump is simply right, and they are honest enough to admit it. I don’t know all their motivations. What I do know is that there has been a sea change in the Republicans. Certainly not all of them, but enough that the shift is unmistakable.

That is what strong leaders do. They elevate those who follow. Much as Enkidu was influenced by Gilgamesh, so our current Republicans are being influenced by Donald Trump. Enkidu was a wild man, who after coming into contact with Gilgamesh, became the latter’s constant companion and supporter. We see much the same dynamic in the modern political world. 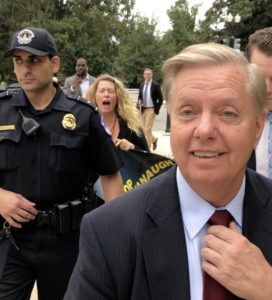 That is the difference a strong leader makes. It emboldens those who are basically good, but of a weaker constitution. They become more willing to step out and do what is needed.

Consider the impact that Jesus (the ultimate strong leader) had on men like Thomas or Peter. We refer to Thomas as “Doubting,” but this is also the same man who once advocated following Jesus so they could die with him (John 11: 16). That same Thomas went on to give his life as a martyr. Peter, though denying Christ, was elevated by his relationship with Jesus, and went on to become a pillar in the early Church, also giving his life for his service to his Lord.

What do Enkidu, Thomas, and Peter all have in common? They became more than they were, due to their interaction with a strong leader. That is currently happening in the Republican Party.

Really, all you need to do is listen to Sen. Lindsey Graham’s tirade in the Senate Judiciary Committee’s hearings about Justice Kavanaugh and Dr. Blasey Ford, and then ask yourself if he would have ever said any such thing two years ago. You know the answer is no. He is a new man, and he is not alone.

President Trump has forced this needed change, and the country is better for it.

The Man And The Honey Tree

Sunshine and Storm in Rhodesia (Part 1)