Politics has always been a nasty business. While many decry the current “tone” of political discourse, we have to remember that politicians have frequently eschewed friendly dialogue and resorted to more serious means of communication. If this surprises you, then I recommend that you read up on the Preston Brooks/Charles Sumner affair, or the duel between Aaron Burr and Alexander Hamilton. Even when physical violence was not used, the harsh rhetoric has historically been a normal part of American Politics. Just read up on the ugly 1800 election battle between Thomas Jefferson and John Adams. It got pretty heated. 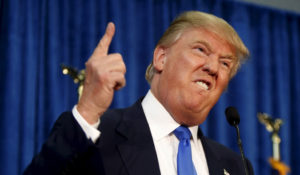 Yet, since most folks are historically-illiterate, they are not aware that such things are actually normal. They are used to Republicans taking the “high road” and avoiding harsh and biting cynicism. For the record, that is one reason Republicans have been so ineffectual over the past fifty years. Few Republicans were willing to get into the mud and sling it around. Democrats have not been so constrained, of course, and have seen their Liberal agenda continue with little opposition, beyond polite dissension from the Right.

With Donald Trump, those days are over. From his primary campaign to become the Republican Presidential nominee, through the general election, and on into his administration, Trump has never shied away from calling a spade a spade. He is not afraid to use harsh language, tone, mocking, and ridicule. It is exactly what we need.

On October 10, radio host Laura Ingraham made this same observation, regarding the need for more ridicule and mocking. She noted that people respond to it. In fact, from her perspective, the idiocy of the Left deserves such treatment. She is exactly right.

Consider some of the nicknames that Trump has bestowed upon his opponents:

The list could go on and on. It is not just nicknames; in an Iowa rally on October 9, he referred to Democrats as “Wacko” and said that they were “too dangerous to govern.” You can read a report on the rally from part of the “Fake News” at the Washington Post here, and  while they are not happy with his rhetoric, they do give some clear examples of his tone and word choice. Here is a taste:

Even as his rally crowd thundered for the imprisonment of two Democratic politicians, Trump said it was the Democrats who were the party of lawlessness.

“You don’t give power to an angry left-wing mob,” Trump said, warning that if Democrats win congressional majorities next month, they would “turn our country so fast into Venezuela.”

Trump took his crowd on a tour of his greatest hits against prominent Democrats. He mockingly called Sen. Richard Blumenthal (D-Conn.), a frequent cable-news critic of Trump, “DaNang Dick,” a reference to the senator overstating his military service during the Vietnam war several years ago.

Note that the crowd is feeding off of his ridicule. They are responding to it, and not only encourage it, but begin to join in. Good ridicule and mockery is not only good rhetoric, it is a motivation to 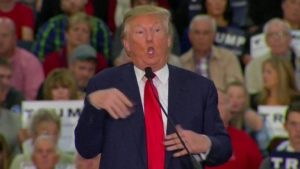 It is high time that the Right remember how to mock and ridicule its opponents. We could all learn from Trump.

Unless you are tired of winning.

Sunshine and Storm in Rhodesia (Part 2)