We have been hailing the Civil Rights Era as a grand and universal success for decades.  Desegregation is an unquestionable good in the eyes of all good Americans.  So, let’s take a victory lap, shall we?  After all, if the end of Jim Crow was such a good thing,  then surely it must have borne some great fruit.
For example:  Desegregation was sold largely based on the assumption that poorly funded black schools were not educating black students well enough and blacks were therefore making less money.  There was a wage gap.    Obviously, since the schools have been desegregated for decades, that wage gap has disappeared, right?
Well, no.  It hasn’t.   In fact, the wage gap hasn’t changed much at all.
Okay, well, that’s one metric but not the only metric.   Education statistics will obviously show how much things have improved for blacks since they were forced – I mean allowed – into white schools.   Right?
According to Arthur Hu, the black literacy rate in 1969 for ages 14 to 24 was damn near 100%.  It’s very hard to find a direct comparison to that number.  But here is an eye-opening report from the NAEP, “The Nation’s Report Card.”   This chart breaks down the percentage of 8th grade students who are reading at or above “proficient” on the reading test. 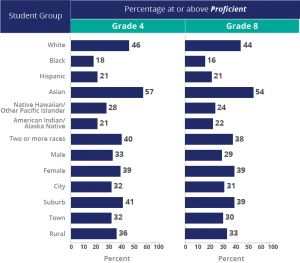 18% of black 4th graders, and 16% of black 8th graders, read at or above “proficiency”.    And white numbers aren’t exactly anything to get excited about either.  But the gap is still enormous between black and white.   This is exactly the kind of thing Desegregation was supposed to end.  And yet it has not ended.  In fact, the gap is worse.  Much worse than it was in the Segregation Era.
Feeling queasy yet?
The fundamental problems Desegregation was supposed to address have not been addressed.  In fact, rather than getting better, they have gotten worse.  We have had a sense of our education system failing for decades, in spite of the data that has been manipulated to hide it.  When older Americans see what 8th graders today are doing, and then think back to what they did, they are often shocked at how incapable kids today actually are.  If you can get past the “golly-gee-he-can-play-games-on-a-smart-phone” illusion, what you find underneath is a kid that can barely read, can’t write at all, and cannot do long division.  For decades, the education industry has been trying to conceal this fact.  Oh, when it’s time to justify a new education tax, they will trot out just enough data to scare everyone into supporting it, but then they go right back to pretending they don’t suck at their jobs.
We’ve looked at this issue from the macro level.  Now lets examine the micro level.   One of the most bussed cities in all of the United States is Nashville, TN.  A prime example of the problems of desegregation could be seen in the school attendance zones.   Black kids from inner city neighborhoods were forced to attend majority white schools far away from their homes.   These kids would often ride 90 minutes to school each way, at a time when high school’s first class began at 7am.  Does that sound like a good idea to you?  In many cases, these kids grew up near inner city high schools that were majority black.  They grew up going to high school football games at those schools and grew up wanting to go to those schools.  But because of arbitrary lines on a map, they were not allowed to go to those schools.  They were forced onto buses and shipped out to schools they had no connection to.   These students resented the hell out of this whole system, and it showed in their behavior and in their performance.
And we’re not done.   Let’s look at what has happened to Historically Black Colleges over the last several decades.   These universities have a long history of serving the black community extremely well.   But over the last few decades, they have fallen to total ruin.   The 4 year graduation rate at HBCUs is 20%.  And those that do graduate get virtually no benefit from it because the degrees from these institutions are now largely seen as worthless by the rest of academia.
Desegregation has been a disaster for black education at every level.  This is true from elementary school all the way through the university level.  Excellent black secondary schools, where men like Walter Williams were educated, are now nothing but government funded day care centers that barely bother to even pretend to be educational facilities.   Historically Black Universities are the laughingstock of the academic world.    Black students are worse in reading than they were.  They are worse in writing than they were.   They are worse in math than they were.   The gap between whites and blacks is larger than it was.
So I ask:  What good has educational desegregation produced?   I see a lot of chaff and not much wheat.  Maybe it’s time to consider that blacks might be better off being educated by blacks.  For one thing, black mothers can’t blame their kids’ failure on racism when their teachers and principals are all black as well.  Black teachers and black principals are far more able to hold black students and parents accountable.
Does this mean I favor forced segregation?
Actually no.  It doesn’t.   Because I don’t think segregation needs force anymore than we need to force people to breathe.    Segregation is the natural preference of mankind.  A quick stroll through any mall or school cafeteria will suffice to prove it.  Birds of a feather and all that.  It’s human nature.
What it does mean is that an objective look at our society proves that desegregation was not the total victory it has been sold as.  Progress doesn’t look like progress.    Maybe it wasn’t ever progress at all.  We say that Tradition is a solution to a problem that’s been fixed for so long everyone forgot what the problem was.  Segregation was the tradition.
Maybe now we’re remembering the problem it fixed.

The Next Revolution Starts at Home