There is a recurring theme in literature and history, where a hero arises from nowhere, totally unexpected, but changes the course of history. It is archetypal, in fact. A young, poor boy steps up, accepts his role, and defeats an undefeatable enemy (see David vs. Goliath, for an example). A group of people find themselves in dire straits, but a dangerous criminal comes to the rescue (consider Riddick from Pitch Black as an example of that). If you want to look at real-life examples, consider the exploits of Sgt. Alvin York or Lt. Audie Murphy.
Politics is no exception to this archetype. Often, when things look bleak, someone steps up to the plate and delivers a homerun. Really, the fact that this actually happens in the political world should underscore how pervasive this archetype actually is, since politics is a gathering place for scum, liars, and idiots. We should be hopeful, knowing that even in that cesspool of humanity, God can provide a deliverer. It has happened throughout history.
In the Bible, we read of such men as Gideon, Samuel, and others who came from humble beginnings, but were called to lead the people from social, spiritual, and physical depths. In the past two years, we have seen such a thing happen in the United States. Yes, I am, of course, speaking of President Donald J. Trump. 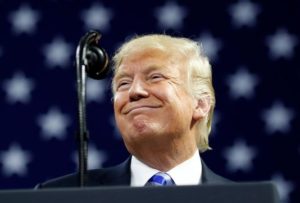 Now, is Trump a model of Christian behavior? Probably not. He is thrice married, twice divorced. It is not outside the realm of possibility that he maintained his philandering ways into his third marriage, as well. No, he is not perfect, but God has often used imperfect men to accomplish His will. In fact, we are all imperfect, so anyone He uses fits that bill. Trump is no exception.
I voted for Trump in the Republican primaries in 2016. I admit it. I also admit that I really did not think he was a serious candidate at the time. I was convinced he was in it for publicity or ego. I just knew that he would provide more laughs than any of the other Republican contenders. My view was that our country was screwed anyway, so we might as well have a chuckle as it all burned down. I began to change my opinion of the man during the Republican Convention, where Trump actually began to present himself as a serious candidate. Still, I really did not think that anyone would beat Hildabeast, to be honest.
You see, I remembered 2012. There were some very bright folks on the Right who claimed that the polls were all wrong. Obama was very disliked and while the polls showed him ahead of Romney, those leftist pollsters were skewing the numbers by oversampling Democrats. When the votes were counted, we would have President Romney. Now, I was no fan of Romney. I did not vote for him. I went third party that  year (as I had in every election since 2000 – and before you start bleating about wasted votes, Romney won my state, so my vote did not hurt him at all). But we all know that he got pretty much exactly what the poll numbers predicted.
So I was not going to fall for that same thing in 2016. Polls showed Hildabeast with a sizable lead, and so I figured that if she was going to be President, at least we could have some debates where Trump got off a few zingers, and he did not disappoint in that regard.
By the time the election rolled around, I did have a glimmer of hope that the poll naysayers were correct this time, but I really was not sure what to expect. I began preparing for the fall of the United States – because that is exactly what would have happened had that horrible woman won.
I vividly remember watching the election results. My television was on, and I tuned out the pundits, just watching the numbers. I also had my laptop out, following the returns on the New York Times site (because, face it, their election coverage on the internet was the best). I remember the meter they prominently displayed, like a speedometer, showing Hillary at 98% chance of winning. Then that number began to sink lower – 70%, 60%, until finally, it turned in Trump’s favor, and then just moved all the way over, admitting the reality that Donald Trump had pulled off the upset and would be the next President. I laughed at the fallen faces on all the networks (except Fox, and they were really just in disbelief).
Then the networks began calling the race. It was officially over, and Trump came out to address his supporters at his New York election headquarters. As he strolled toward the podium, the Rolling Stones blared over the speakers: “You Can’t Always Get What You Want, But If You Try Sometime You Find, You Get What You Need!” I admit it again – I guffawed. Yes, I know he had used the song during his campaign, but now it was real. It was one more jab at his detractors. Classic Trump.
Over the past 19 months, Trump has done something few Republican presidents have accomplished. He has delivered on his campaign promises, from lowering taxes, to renogiating trade deals, to curtailing illegal immigration. Sure, there are things he has not yet accomplished (I am still waiting on a wall), but by and large, he has done what he promised. That does not mean I agree with all of his policies, or even some of those promises, but all in all, I am pleased.
No, Trump is not a perfect man. Maybe he is not even a good man; I don’t really know. But I do know God has used such men to accomplish His will throughout history. Read the book of Daniel, where God used Babylonian and Persian Kings to bring about his desired ends. If He can use Nebuchadnezzar,Cyrus, and Darius, He can use Donald J. Trump. And I firmly believe that God is in control of this whole thing. I really do.
So when the Hard Right looks back at the Trump administration, I am convinced that we will see this as a turning point – the point at which we began to win, leading to our ultimate victory in saving Western Civilization. This is the moment when God began to give us a positive answer to our prayers.
Donald Trump is not the hero I would have chosen three years ago, but he is turning out to be the hero that we so desperately needed.
Enjoy the victories we achieve during these next 6 1/2 years (because he will win convincingly in 2020), but do not disengage from the fight. Get busy. Keep busy. Keep winning. I am not tired of it yet. I hope you aren’t either.

The Battle of the Rosebud