This morning #BoycottNRA was trending on Twitter. That’s right. Liberals who aren’t NRA members are going to punish the NRA by not becoming members.* The same people that claim Donald Trump is literally Hitler think the government should have all the guns. Before you strip a gear trying to ponder the depths of this stupidity, there is something more sensible to consider. It’s time to join the NRA. I just signed up.
I know. your mailman might hate you if she delivers an NRA magazine to your mailbox once a month. Your kid’s teacher will recoil in horror if your kid cites an article from American Rifleman for a school paper. Well, it’s time to put our money where are mouth is.
I am aware that the NRA is not perfect. They compromise. Yes, your first choice should be Gun Owners of America. Your second choice should be Jews for the Preservation of Firearms Ownership. But the NRA is the biggest. They are the most visible. They have a lot of clout, a lot of money, and a lot of visibility. Politicians hesitate to cross them.
If you join, then be active. Let them know that you don’t favor compromise. Vote for NRA leaders that represent you. I intend to let them know that I don’t appreciate their capitulation on bump stocks, and I don’t think the Fix NICS is a good idea. I intend to lambaste them for the idiotic endorsements they made in my local elections. I intend to be the backbone they seem to lack.
One thing liberals do not understand is that the NRA is not just a few people with lots of money that pull puppet strings on the politicians. Politicians don’t fear Wayne LaPierre. They fear the NRA members. There are millions of NRA members that individually have no voice, but collectively they can’t be ignored. They represent a block of votes that they can’t win without. There are around 5 million members of the NRA. This only about 10 percent of the people that own firearms. You must know, that they won’t stop until they have ALL the guns. Lets make the NRA swell to 10 million members, to 15 million. Lets make it represent us, as a no compromise organization. 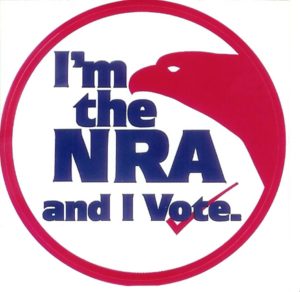 *The actual boycott, which seems to have been effective, was aimed at businesses that give discounts to NRA members. By all means, let these businesses know how disappointed you are that they don’t want your business.