Firstly, a girl hopped up on male hormones is not a boy. Leftists as always, are enemies of truth. A Man of the West has nothing to fear from the truth. No matter hold badly a person wants to, you cannot become a member of the opposite sex.  Perhaps someday we will develop such technology. I hope not. The girl can claim to be a boy, but what is the truth of the matter? 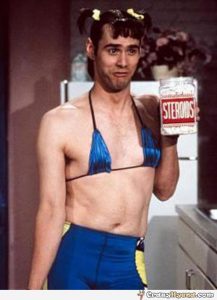 Secondly, an athlete should not be able to compete while using performance enhancing drugs. Male hormones qualify, even when taken by males. It is especially so when taken by a female. Equality is not something we strive for in competition. You bring what you were born with. We don’t allow short people to play basketball on stilts, and we don’t allow people to cheat by taking performance enhancing drugs.
Thirdly, just because a girl who takes substances in order to pretend to be a boy can’t wrestle against the boys, it doesn’t mean she should be allowed to wrestle against the girls. She’s taking drugs that enhance her ability. Disqualify her. She simply should not be eligible for sports when she’s taking drugs. Again we see that when liberals choose a cause to be the cause de jour, all other leftist causes must take a back seat. Today’s pet cause is transgenderism. Feminism must take a back seat. The girls who competed honestly were cheated out of a championship by a person taking drugs but they’d better be quiet or risk being called bigots.

President Trump is offering us respite