Editor’s Note: We are happy to offer another in our Ladies of the West series. This one is penned by our friend Heidi. You can read more of her work here, at her blog.

She walks around him. Slowly. Carefully. White silk whispers in the early summer sun as dappled shadows of light through an inherited canopy dance across her upturned face.  Softness in her eyes and a shimmer in his indicate this moment will be one that will bind them together long after the gifts have been put away or exchanged and the little ones start to come.  There will be plenty of time for distraction.  But not today.  In this moment they share a singular focus and purpose.

Once, twice, then all the way to seven she encircles him. The assembled crowd and every breathless angel stirring heaven with their praise watches in silent witness of the love between two people as a covenant is woven before them.

This. This part of the ancient wedding ceremony is, as are most things sacred, intentional and beautiful.  Complex and demanding.

Seven times he sees her then feels her move around him. Her hand lightly touches his chest, his shoulder, his back, before starting over again.  Each caress carrying the power of a bride as she captivates him completely.  Like the Israelites walked round Jericho, stately and determined, she moves. Simply stepping in time to a divine calling until crumbling ashes are all that remain.

She’s seen his inner self. His heart. She knows him completely, and in the way women can, takes seriously the task of protecting her beloved.  Any of his weaknesses or vulnerabilities are hers to protect, to guard, to breach, or to expose if she should choose.

As she surrounds him, circuit after circuit, she becomes the first line of defense for his heart with all the rights and responsibilities only a wife can carry. She will have the power to conquer him or to fight with him, to serve him and to enjoy the privilege of his strength and provision, or to tear him down, piece by piece until only a shell remains.

She holds a power no other woman has ever wielded in his life.

Can she be trusted? 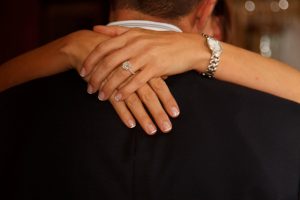 She will be the one who nurtures his children and preserves their home.  Under a steady hand she can build a sanctuary from the war that wages and keep out the little foxes who would like nothing more than to steal his honor or defile their covenant.

Women have spent so long looking to the roles of men as their glass ceiling, their windmill to tilt and overcome, they have forgotten that the most powerful they will ever be is when they choose to live as the woman in white who dares to take his name.

That moment of surrender, as he welcomes her to know him and she gives up the life she had before to become his, has become an altar, a holy edifice, as a gathering of promises solidifies into a brand new identity and two become one in purpose and shared destiny.

But she doesn’t just encircle him on that day.  She lives a life of seven circles as a matter of purposeful habit.

He trusts her. He desires her.  He loves her. He leads her. He guides her. He respects her. He cares for her.

A woman who lives this way with authenticity and sincerity will never lack for anything she needs. She will have his strength and his passion at her disposal whenever she will need it.  He will protect her with everything within his power to do so and defend her with his life.

But above all else, this woman will be loved with a ferocity and devotion she could not have manipulated into existence.

Impacting generations, she builds and leaves a legacy capable of standing long after parades and promotions have been forgotten.

Finding calling and fulfillment by his side she will age gracefully and become more beautiful to him over the years. Their lives will entwine and their strength grow to a force to be reckoned with by a world of predators who would want to divide them.  She will be a woman who walks in an authority and confidence tempered by the protective circle of his arms.  Security in her revolutionary identity is incomprehensible to her feminist sisters and merely the beginning of her day.

She is a truly dynamic woman at her core as she realizes what really matters;

She is loved.  This, ultimately, is what women crave more than anything. It is what we are born for and how we were created to thrive.  An unloved woman is only half alive.

A loved woman spreads life wherever she goes. This is power.

Christian Apologetics: When your ox gets gored.