You may recall George Orwell’s 1984, where his protagonist, Winston Smith, works in the Ministry of Truth. There, Smith’s job is to go back to old newspaper articles and revise them to match with the current governmental policies. In other words, perhaps the previous year had seen his own country of Oceania allied with Eastasia to fight a common enemy, Eurasia. However, in the current year, these alliances have been altered and Oceania is now teamed with Eurasia to fight with its former ally, Eastasia. All the newspaper articles from the earlier time period spoke favorably of the former ally and cast aspersion on the former enemy. But now that has all changed, so Smith must go back to revise the old articles to reflect the new ‘truth.’ The party (governmental powers, often referred to as “Big Brother”) can never be wrong, so those past statements need to be changed to maintain the facade. Those old articles are dropped into the “memory hole,” where past policies simply ceased to exist, as far as the populace was concerned.
It might strike you as interesting that we are seeing this happen before our very eyes. Read this report, which shows how the New York Times has gone back to alter its headline regarding the wiretapping of Trump Tower.  Originally, the headline was: “Wiretapped Data Used in Inquiry of Trump Aides,” but it has been changed to: “Intercepted Russian Communications Part of Inquiry Into Trump Associates.” It is evident that the narrative of the Establishment, or Deep State, has been altered, and since it can never be wrong, some Winston Smith-type has gone in to make the requisite changes. It is truly 1984 happening right now in 2017.
There is a difference, though. No longer are we confined to the establishment mouthpieces for information. The Internet has provided us with a mechanism for observing these changes. The “memory hole,” no longer exists, as it once did. Once something is posted online, you might go in and change it, but that does not mean the original does not still exist in cyberspace.
This is why we refer to Fake News. Just as Winston Smith’s revised history was no more accurate than a child’s fib when caught doing something bad, so is the New York Times’ altered headline. It is a blatant attempt to influence public perception. The difference is that this is no longer the era when such tactics can work. The Establishment is still working with outdated approaches to influence-peddling, and it shows. Too many people have been awakened to reality, and no amount of memory holing will stop concerned people from pushing for the truth. A rising number of people are no longer content to be force fed lies and propaganda. Now, they agitate for the truth and are willing to point out the paucity of Establishment morality and ethics. 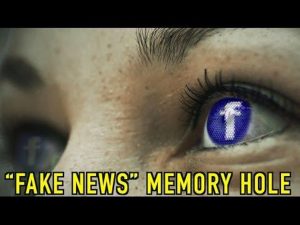 Of course, the New York Times is not the only organization that practices such behavior. Even Facebook has been trying to drop posts into a memory hole, if doing so fits their globalist perspective. Some article links simply disappear. Twitter has been engaged in similar attempts, by banning “unsavory” accounts and “shadow banning” others, where tweets are not seen by followers of the unwanted account. It won’t work.
It is no longer 1984 (or 1949, when Orwell’s book was published). This is 2017, and we refuse to accept the lies from the Ministry of Truth, for it is nothing more than a Ministry of Lies.

Man of the West: Nathanael Greene