Not all of them walk the halls of power or plot in desert tents.

We also have home-grown lunatics.

This is sheer raving lunacy. This poor sod had been fed a steady diet of Cultural Marxism, Political Correctness, and soy.

His madness led him to believe he was “a transgender woman who hated men and toxic masculinity.“ 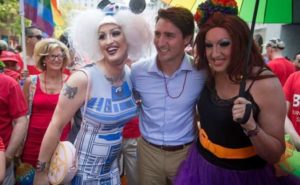 There is nothing sane about that statement. There is nothing wholesome or redeeming about any of those ideas. Transgenderism is moral madness. Toxic masculinity is a lie told by feminists to paper over their failed lives.

None of those ideas would exist outside the intellectual cesspool that has become the United States. We know the disease vectors come from Marxism and Communist thought, but they have found fertile soil here, in the remains of the Republic.

This poison is spread by many, and it has a strange effect on otherwise normal folks to accept the poisoned pill of thought control and satanic beliefs by forcing people to either accept a public shaming, possibly lose their livelihood, or to go along with the lies.

Most people act out of fear. They agree to this madness so they appear to be good folks. But by accepting this toxic swill, they corrupt themselves and enable the Randy Stair’s to fester and then explode, hurting and killing.

Since we’ve decided God is only for Sundays and when our sports team is losing, we’ve lost the moral fiber, as a nation, to stand up for truth and decency. We’ve lost the moral immune system that would reject these hellish works and resist the infection.

Randy, the poor chump, by turning his soul and mind into mush, had become our enemy. The peddlers of this poison are our enemies. And, sadly, the decent folk that acquiesence to this madness are on their way to becoming our enemy.

But because this is primarily a battle of ideas and words, for now, we options in beating back the rotting putrescence of Progressive Thought.

We have a family friend whose son decided he was a girl. Every time he comes up, I point out how insane he is and how he needs help, not to have people feed his delusion. At first, my daughters and wife, who know the kid, thought I was being overly mean. Now? They are agreeing with me. He’s lost his grip on reality. I’ve told my family we are not to have anything to do with him. They’ve agreed. It’s not our place to fix him, and I sure as hell won’t condone his actions.

We’ve not gone to parties his wealthy family has thrown because of that decision. My kids grumble, but we don’t go.

As a nation, we’ve lost a lot of ground, and it’s going to take quite a bit of effort to turn things around.