Editor’s Note: This excerpt, chapter XIV from “A Short History of the Confederate States of America,” provides the political outlook of Jefferson Davis, and is worth your time. It is short, poignant, and highlights a true American outlook. The whole book is an informative and important read, as we heartily recommend it. 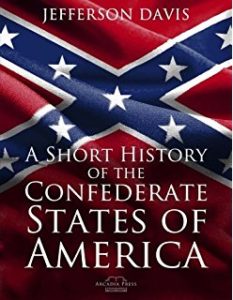 While the limits assigned to this volume do not permit a full presentation of the arguments, or an adequate exposition of the historical facts that justified the secession of the South ern States, and entitled them to be regarded not as ” rebels ” or “traitors,” but as defenders of the original principles on which the fathers founded our system of government, or a full demonstration of the fact that the essential truths which they declared “unalienable” are the foundation-stones on which rests the vindication of the Confederate cause, yet, before proceeding with the narrative of the events of the war between the States, it is essential that the candid student should know and bear in mind that the intelligent people of the South were practically unanimous in the belief:
That the States of which the American Union was formed, from the moment when they emerged from their colonial or provincial condition, became, severally, sovereign, free, and independent States—not one State or Nation;
That the Union formed under the Articles of Confederation was a compact between the States in which these attributes of sovereignty, freedom, and independence were expressly asserted and guaranteed;
That in forming ” the more perfect Union ” of the Constitution afterward adopted, the same contracting powers formed an amended compact, without any surrender of these attributes, either expressed or implied; but, on the contrary, by the Tenth Amendment to the Constitution, limiting the authority of the Federal Government to its express grants, with a distinct provision against the presumption of a surrender of anything by implication;
That political sovereignty, in contradistinction to the natural rights of man, resides neither in the individual citizen, nor in unorganized masses, nor in fractional subdivisions of a community, but in the people of an organized political body;
That no ” republican form of government,” in the sense in which that expression is used in the Constitution, and was generally understood by the founders of the Union—whether it be the government of a State or of a Confederation of States —is possessed of any sovereignty whatever, but merely exercises certain powers delegated by the sovereign authority of the people, and subject to recall and resumption by the same authority that conferred them;
That the ” people ” who organized the first Confederation, the people who dissolved it, the people who ordained and established the Constitution which succeeded it—the only people known or referred to in the phraseology of that period—were the people of the respective States, each acting separately and with absolute independence of the others;
That, in forming and adopting the Constitution, the States, or the people of the States, formed a new Government but no new People, and that, consequently, no new sovereignty was created; for sovereignty, in an American republic, can belong only to a People, never to a Government; and that the Federal Government is entitled to exercise only the powers delegated to it by the people of the several States.
That the term People in the preamble to the Constitution and in the tenth Amendment, is used distributively; that the only “People of the United States” known to the Constitution are the people of each State in the Union; that no such political community or corporate unit as one people of the United States then existed, has ever been organized, or yet exists; and that no political action by the people of the United States  in the aggregate has ever taken place, or ever can take place under the Constitution.
These principles, although they had come to be considered as peculiarly Southern, were not sectional in their origin. In the beginning and earlier years of our history they were cherished as faithfully and guarded as jealously in Massachusetts and New Hampshire as in Virginia and South Carolina.
It was in these principles that I was nurtured.

We Have Many Enemies