Judge Moore won the Senate primary in Alabama. He defeated Luther Strange, who was the incumbent appointed to fill the vacancy left by Jeff Sessions.
The President and Senate leaders backed the loser. The voters didn’t listen to them. Moore won with a ten point margin. Strange has been in lockstep with Mitch McConnell, the useless majority leader of the Senate. Judge Moore has stated that he would not have voted on the half hearted Obamacare replacement that was recently defeated.
Moore is a character. He was removed from his position as Chief Justice of the Alabama Supreme Court for refusing a judge’s order to remove a monument of The Ten Commandments. 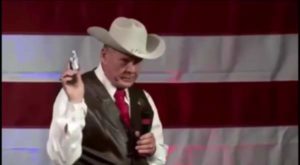 He then ran for Governor and lost twice, and then was elected Chief Justice again. He was then suspended for ordering judges to continue to enforce a same sex marriage ban that the US Supreme court overturned. He resigned to run for Senate.
The first thing to note about this is that the Republican establishment has been given a reminder. They are out of step with their base. This serves as a notice that any Republican can be voted out in the primary or the general. Strange has been in lockstep with Mitch McConnell, the Given the results we’re seeing, I say ditch them all.
The second thing to note is that Moore’s supporters are Trump supporters. Despite his endorsement of Strange, the voters picked Moore. Trump has been reminded that he was hired to do a job for us. We, the people are the boss, not the president. Trump must work to advance our agenda, not his own. We didn’t vote for Trump to be his cheerleaders.
We like what we see so far, and wish Judge Moore luck in the general election.