It’s kind of a strange question, though. I need a bourbon match for a book character. You know, a kind of personality match: aggressive male, brilliant entrepreneur, completely stingy with money, doesn’t drink much, but needs a good bourbon for when, say, his hippie Marxist parents visit. He’s not adventurous; his entire goal in life is to make money and be in control. Could you recommend something for my character?
The Answer:
A guy with this kind of money and power… you would expect Pappy Van Winkle.  But he won’t touch it.  It’s three times as expensive and not as good.  In short, it’s what you drink to impress them what don’t know any better. 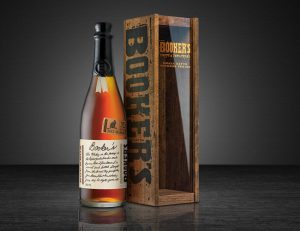 Your man has a bottle of Booker’s.  He loves it because it’s barrel strength.  It’s uncut and therefore slightly unpredictable.  It’s always good but it’s never exactly the same.  This little bit of chaos is all he can tolerate in his conquered, controlled world because it reminds him that some things are still more art than science, and taming and them and controlling them may reduce them to mere mediocrity.
He never cuts it with water.  He has cold whiskey stones that he puts in the glass and sips it straight.
He never drinks to get hammered.  He remembers that one time he heard an old distiller named Booker Noe once said, “There comes a time in a man’s life when he isn’t looking to get hammered.  He just wants something that will change his attitude a little.  He just wants to take a little sip and think, “aww hell…  it don’t matter.”
You can tell a lot about a man by his bourbon.
Do yourself a favor and go to a liquor store and look at a bottle of Bookers real well.  Notice the box it comes in.  Its very distinctive and the details about it will make a very interesting few words.  Booker’s is hot by the way, usually 128 to 132 proof or so, and is usually very sweet and complex.  It’s fantastic.  Peppery, smokey, caramel, and vanilla will find their way into a taster’s mind.
Now…
I’ll have to go have some.

A Chronicle Of Our Decline — Part 1

The Future is Homeschooling