We are more than human. We are fallen humans. The consequences of this go throughout our bodies, our spirits, and through them, the societies that we form. No family is safe from its ravages. No clan can be protected from it. No government is immune to its effects. When there is a human around, there are problems. Only one man, the Lord Jesus Christ, was born un-fallen. Through Him, we can all be redeemed and saved, but we’re not there yet.
Most theologians view our salvation in three stages: 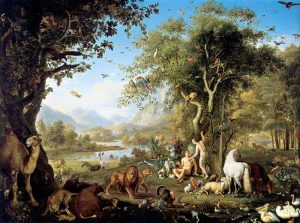 These undo the results of the Fall. Justification erases (virtually) our own individual records of the wrongs that we have done. Through it, the deeds that we have done were accounted to Christ Jesus, and our judicial record in Heaven is clean. Sanctification (which we do not complete until death) deletes our tendency to sin and disobey God’s law. Most of us are sanctified slowly, but there are those who suddenly make a large turnaround in their lives, enabled by God. Our glorification will be part of the grand restoration of the universe at the end of the age. There, death and the grave will finally be defeated—we will no longer age, get sick, or die.
In the meantime, we are stuck with being un-sanctified and un-glorified. We still sin, we still age, and we still die. How do we deal with this? As far as not being glorified yet, the most obvious accommodation is that we have doctors and hospitals to try and heal our bodies. No one seems to have a problem with this interim solution.
But we still sin. Our greed, our covetousness, our anger, our gluttony, and all our other sins affect both us and the people around us. There is still something fundamentally wrong with us. Can we redirect our fallen nature to limit its consequences and even, in some cases, use it to provide incentive to do what is right and good?
In the next life, we won’t need money. There won’t be a curse, so there will be no more starvation, no food shortages (if we even need food), nor anything like that. In this life, however, we are greedy and want more of everything. Capitalism seems to allow the best of both worlds.
Under capitalism, human greed is redirected. No longer is the impulse to simply hoard what you’ve got, but to use what you’ve got to get even more. In the process, more wealth is created that you don’t get your hands on, and this gets distributed to other people. I’m sure you’re familiar with this aspect of capitalism, so I won’t expound on it.
Many utopias have been written about. From Thomas More to Gene Roddenberry, with Karl Marx in between, they have all ignored some aspect of human nature. Most of them ascribe an altruism to us that we just do not have at our cores. They think that by making sure everyone is fed and clothed, nobody will want anything more.
I’m not going to go as far as Gordon Gekko and say that greed is right, because it’s not. But I will say it must be accounted for.

The Power of Gratitude