What Is The Main Thesis/Argument Of The Book?
Ultimately, the book is intended to show that the Anglo-Saxon culture did not simply adopt Roman Christianity, replacing their prior pagan religions. Neither did they adopt Irish/Celtic Christianity and then later come to accept Roman ideals. Rather, the society developed its own form of Christianity, with the recognized head in Rome, from all of those various strains of historical descent. The people that served as primary instigators and leaders of the religious transformation used their skills, theological presuppositions, and knowledge, coupled with the historical circumstances, and created a new hybrid version of Christianity.
Mayr-Harting argues that the integration of these multiple religious perspectives allowed the religion to become indigenous to England, unlike that found in other contemporary places, but flexible enough that it was later incorporated into Roman Catholicism, worldwide. He argues that the “wonderful fusion and development of Christian cultures, which had taken place in England, passed into Carolingian Christianity, and thence into the main stream of the Western Christian tradition” (p. 276). In a sense, the thesis is that the Anglo-Saxons took the various Christian traditions that came to them, used their pagan background, forged a new interpretation and application of Christian identity, and exported it to the larger world. This book is an account of how that happened.


What Are The Main Ways In Which The Scholars Support The Thesis/Argument?
While Mayr-Harting does not focus upon the conversion narrative, he does not ignore it, either. He discusses the importance that the mission of St. Augustine had on the development of Anglo-Saxon Christianity. In fact, the first portion of the book begins with the mission and its impact. He looks at the various historical threads, such as paganism, early Roman Christianity which survived among the Britons, later Roman missions, Irish missions, and how they all came together at Whitby.
This first section of the book, covering over one hundred pages (out of 276), sets the stage for the how Anglo-Saxon Christianity began to formulate. He looks at the literature, such as it is, from each of these groups, and shows how those writings give us clues to the mindset of understanding of the people involved. By considering the pagan writings, he argues that the warrior mindset was prevalent and remained a part of the culture, post-Christianization. Social understandings, such as magic and herb use, are also discussed, showing how they were integral to understanding the culture and how it would come to receive Christianity (p. 29). Mayr-Harting points out that “the struggle between Christianity and paganism…was the genuine engagement of two life principles” (p. 30). 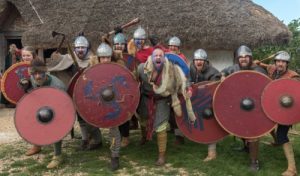 It was this world, pagan with some lingering elements of Roman Christianity, that Augustine entered in AD 597. Sent by Pope Gregory, this mission intended to convert the pagans to Christianity, though not to necessarily change the overall culture. The pope had indicated that it was acceptable to convert pagan temples into Christian churches. Pagan feast days could be incorporated into the life of the Church, as long as they were properly “de-paganized” and “Christianized.” This method served as a key aspect of Anglo-Saxon Christian development. Much of the pagan past was adopted and adapted for Christianity. Even pagan oral tradition was given a Christian reworking and continued to be passed down, such as Beowulf.
Mayr-Harting does spend significant time considering the types of liturgical and theological works that might (or might not) have been used by various individuals in their journeys and missions. With this, he is attempting to show the connections (or not) between these missionaries and their continental counterparts. More readily recognizable is the Irish Christian contingent that Augustine found when he arrived. What Christianity still survived in England was primarily due to Irish influence, and most Christians looked to these Irish leaders, primarily monks, for spiritual guidance and leadership. Augustine was never able to really reach rapprochement with them. Those who followed him, such as Theodore of Tarsus, eventually did reach an agreement over the theological and leadership issues that separated the two groups, and Roman primacy was accepted. For a period of time, there was an ambiguous relationship between the two groups – they accepted one another as true Christians, and not heretics, but still maintained a separation. No less a person than Bede could point out that St. Aidan was a true saint of God, even though he did not keep the proper date of Easter. Still, the gulf between the two groups was eventually breached, and the Roman faction became dominant.
Though Rome ‘won’ the contention, the Irish influence was evident. The rise of monasteries and the role that they played in Anglo-Saxon Christianity was one key aspect of this influence. Important people, such as St. Cedd, served as bridges between the two cultures, by synthesizing the disparate practices of bishops between the two groups (p. 101). While the author does not place an undue emphasis on the Council at Whitby, he doesn’t discount its importance. He argues that it was primarily a Northumbrian affair and that contemporaries were not so concerned about the Irish/Roman dichotomy, as modern historians are (p. 106). At the same time, many important individuals from both sides were present at the conference, where the eventual verdict was to accept the Roman side of the topics being argued (especially the date of Easter). This was one more important step in the merging of these various historical backgrounds of the English people.
The second portion of the book, comprised of over 150 pages, looks to the practice of the Christians of Anglo-Saxon England after the council, as these historical threads were becoming tightly intertwined. Careful attention is paid to the way in which the church came to understand monastic life, and the role it played in the life of Christianity. While founded upon the eastern ascetics (such as St. Anthony the Great), the particular adaptation of monastic practice to England was considered. The interaction between Roman-oriented bishops and more independent monastics played an important role.
Likewise, due to the various background traditions (pagan worship, Irish Christianity, Roman Christianity, etc.), there was a divergence in liturgical practice and worship style. Mayr-Harting, while acknowledging that the Anglo-Saxon Church did look to Rome for ultimate religious leadership, still developed its own style and form for worship, prayer life, and evangelism. As previously mentioned, many of these practices were eventually incorporated into Roman Catholicism as a whole, and became normative outside of England.
The relationship between leadership and laity, saints and heroes, and how all of these things came to be recognized and utilized within the Anglo-Saxon context are vital characteristics of the final incarnation of Anglo-Saxon Christianity. The reality is that the form that these institutions took in other lands did not fit well with Anglo-Saxon culture and had to be adapted (p. 248). While pagan heroes were “Christianized,” many leading Christians came to be recognized as Saints, and were often described in similar ways to the pagan heroes of old. They overcame similar obstacles and received similar accolades. While the pagan hero might use a sword to slay an enemy, the Saint might pour oil into the sea to calm a raging storm. Either way, they emerged victorious, and were held up as ideals of living.
Finally, Mayr-Harting presents St. Boniface as the “Mirror of English History” (p. 262). An Englishman, St. Boniface spent his life in self-exiled missionary work on the continent. He spread Anglo-Saxon Christian understanding to the continent, especially impacting Charlemagne’s court school, resulting in these ideals being incorporated into a much larger realm that England alone. The author shows how the various historical legacies of the Anglo-Saxon church are found in Boniface’s work and teaching. They serve as a microcosm of the whole of Anglo-Saxon Christianity.

What Are The Strengths And Weaknesses Of The Book?
Regarding content, Mayr-Harting has produced an outstanding work. He avoids the common problem of listing numerous historical facts without properly connecting them to the topic. Though it covers significant material, it is fairly short and easy to read. This does not mean that the work is simplistic or lacking in important detail. In fact, it is well-written and the topics are explained in good detail. The focus and content of the book are commendable.
The book has a well-developed organization. Breaking the book into two sections, one setting the foundation and the other showing the practical application of the synthesis that became Anglo-Saxon Christianity, was well-conceived. The various chapter breakdowns are also done very well. It was easy to follow the flow, though the narrative, such as it was, was not chronological. This did not seem to hurt the book in any way.
The supplementary material, including maps and references, were helpful for both comprehension and further study, if one was so inclined. The first and third of the three prefaces (one for each edition of the book) were well done. The second preface was short and added little. The focus upon certain historically important characters (e.g. Wilfred, Boniface) was a nice humanizing touch, providing relief from non-personal social descriptions.
There were few weaknesses with the content, besides the possibility of the reader disagreeing with some of Mayr-Harting’s conclusions to some issues. That is not really a weakness of content, but simply a recognition that it is possible to find error with some aspects of his analysis. The lack of a clear conclusion to the book causes the reader to have to rely upon a ready recollection of the content to draw conclusions, rather than having the main arguments reproduced in the final pages. The book would have benefitted from such an ending. Regarding the production of the book, many of the pages were bizarrely printed, with some lines dark and others faint.
References