Harsh words for a confessed Christian? Not if you heed the words of Christ himself: 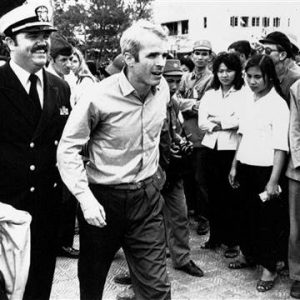 John McCain sold out his brothers as a POW in Vietnam. He collaborated with the enemy to undermine the US. After his capture, the Viet Cong all of a sudden became very good at hitting aircraft with their SAMs, while before his capture it was exceedingly rare. In absolute hypocrisy to his faithlessness, he came home to acclaim and rewards, and rode his “hero” status into political power. And John used his power to hide his shame, by having his records sealed, and burying all knowledge that the US left hundreds of POWs behind after the war.
As a senator, he continued his betrayal of his country. In 1987, he was caught using his power to intimidate regulators into backing off of one of his donors, Charlie Keating. The same Keating whose reckless banking practices eventually got him convicted on 73 counts, costing tax payers 3.4 billion dollars. He held McCain’s leash all the way up to his conviction. And there were more. Many, many more. In addition to his graft and pork, McCain is guilty of authoring the NDA bill, which grants the president power to indefinitely detain American citizens.
John McCain is a self serving, corrupt brat who was handed everything in life because of his name. He was never disciplined for crashing three planes during his service. He was never held to account for multiple affairs during his service, or for leaving his wife after she had been crippled from a car crash. He thinks nothing of sending your children off to fight invented wars so that he and his buddies can make a buck. And to top it all off, the only thing he learned from his time as a POW was the value of keeping people behind bars forever.
It’s no accident that the poet Dante reserved the lowest circle of hell for traitors. And John McCain has reserved himself a front row seat on the Express train.