Editor’s Note: Alexander Campbell was a leading church reformer of the Second Great Awakening in America. Along with his father, Thomas, and Barton W. Stone, Campbell was a founder of the churches that have come to be known as Disciples of Christ, Independent Christian Churches, and Churches of Christ. The material presented here is from his book “The Christian System.” 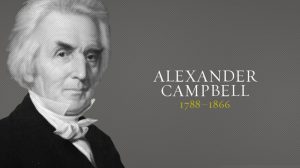 I. Repentance is an effect of faith: for who that believes not that God exists, can have “repentance towards God”? Repentance is sorrow for sins committed; but it is more. It is a resolution to forsake them; but it is more. It is actual “ceasing to do evil, and learning to do well.” This is “repentance unto life,” or what is truly called reformation. Such is the force of the command, “Repent every one of you.” It is not merely, Be sorry for what you have done wrong; nor is it, Resolve to do better; nor even, Try to amend your ways: but it is actual amendment of life from the views and the motives which the gospel of Christ exhibits. Gospel repentance is the offspring of gospel light and gospel motive, and therefore, it is the effect, and not the cause, of belief of the testimony of God.
II. True repentance is, then, always consummated in actual reformation of life. It therefore carries in its very essence, the idea of restitution. For no man can cordially disallow or reprobate his sinful course of life, who does not redress the wrongs he has done to the utmost limit of his power. To God, he can make no restitution, only as he refunds to his creatures, whom he has injured. If, then, any one is convinced in his own mind, that he has injured the person, the character, or the property of his neighbor, by word or deed, and has it in his power, by word or deed, to undo the evil he has done, or to restore what he has unjustly taken away, he will certainly do it, if his repentance be according to either the law of Moses or the Gospel of Christ. Otherwise his repentance is of no value: for God cannot, without trampling on his own law, and dishonoring his own character, forgive any man who is conscious of any sin he has done to any man, unless to the utmost extent of his power, he make good the injury he has done. Thus saith the Lord, “If a soul sin and commit a trespass against the Lord, and lie unto his neighbor in that which was delivered him to keep, or in fellowship, (i. e., trading,) or in anything taken away by violence, or has deceived his neighbor, or have found that which was lost, and lieth concerning it, or sweareth falsely; in any or all these that a man doeth, sinning therein: Then it shall be, because he hath sinned and is guilty, that he shall restore that which he took violently away, or the thing which he has deceitfully gotten, or that which was delivered him to keep, or that lost thing which he found, or all that about which he has sworn falsely, he shall even restore it in the principal, and shall add a fifth part more thereto, and give it to him to whom it appertaineth, in the day of his trespass offering, and he shall bring his trespass offering to the Lord, and the priest shall make atonement for him before the Lord, and it shall be forgiven him.” Levit. 6:1-7. Sin offerings without repentance, and repentance without sin offerings, are equally ineffectual before God. We sin against God always, when we sin against man; and therefore, after making all things right with man, we can only, through sacrifice, which makes the matter right with God, obtain forgiveness. To the same effect, Jesus speaks, Matt. 5:23, 24, “Be reconciled to your brother,” first make the matter right with him, “and then come and offer your gift.”