Editor’s Note: G. Campbell Morgan (1863-1945) was one of the most famous evangelists of the early 20th Century. He began preaching at the age of 13 and continued for the rest of his life. He was a great advocate for the importance of Bible study. Here, we present his admonition to be courageous.

Five familiar pictures of the New Testament are recalled by the reading of these words.
The first is that of a man sick of the palsy, carried by his friends into the presence of Jesus; physically trembling and troubled in heart by the consciousness of sin.
The second is that of a woman struggling to reach Him through the movement and pressure of a jostling crowd, troubled by all the suffering of twelve years, twelve years of physical pain, of divorce, of ostracism, of excommunication.
The third is that of a company of disciples in the midst of difficulties which had arisen in the path of duty. The Master had bid them set the prow of their vessel toward the farther shore, and the wind was contrary, and the waves were boisterous. The picture is that of these men suddenly confronted by a new and nameless terror, a specter of the night, moving over the waters toward them.
The fourth is that of a company of disciples face to face with three facts: first, the fact of their Lord’s approaching departure by some way they could not understand, and to some bourne about which they knew nothing; second, the fact of the antagonism of the world to Him and to His ideals, and consequently to them also, if in His absence they remained loyal to Him; and, third, the fact of their own appalling weakness. Or briefly, it is a picture of a company of men troubled by the fear of the future.
The last picture is that of a servant of God in prison, rescued from the mob yesterday, threatened by a new conspiracy tomorrow, troubled by the force of circumstances which hindered the progress of his service. 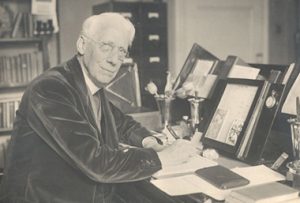 Gospel Song of the Week – How Great Thou Art

Editor’s note: The following is extracted from The Conquered World, and Other Papers, by R. F.