We know the West is in a state of marked decline.
No one with eyes denies this. 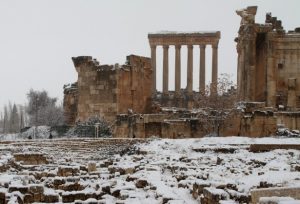 When the history of our time and place is written in the decades to come, if tomorrow’s historians are anywhere close to as lazy as today’s, much of the story will fall by the wayside. It will be a simple task to dismiss the decline and eventual rebirth as the transient oscillations of cyclical civilizational tides. It will be tempting and frighteningly simple to equate the events that transpired between the end of the 19th and the beginning of the 21st centuries with the falls of everything from Rome to the Ottomans.
However, the decline of the West isn’t simply a matter of dwindling cultural and social inertia — it was a controlled demolition a century in the making by enemies foreign and domestic.
Chances are good that you already know this, but identifying the culprits all in one place will help keep focus on the forest rather than the trees.
It wasn’t just the bankers who are responsible for the decline, or just the academics, or just the immigrants, or just the politicians.
It was a team effort, and it was so from Day 1.
This will be a five-part series examining some of the contributing factors that precipitated and exacerbated the decline of Western Civilization, so that our posterity has a chance to learn the one fundamental truth of history; that it is a long, successive story of people toppling things over in the pursuit of evil.
In brief, here are the five essential themes, or perhaps factors, that I will use to inform my speculation.

1) We’re getting dumber. Incredibly dumber. Every year that goes by we forget more than we learn, we become further removed from the kind of knowledge of fundamentals that allows for true innovation rather than refinement; as subsequent generations become further removed from what we can term “peak knowledge”* familiarity with fundamental principles disappears and will at some point have to be re-engineered in order to be restored. The Millennials are as ignorant as they are arrogant, and they will be a problem far worse than the Boomers sooner than you think.

2) We’re getting poorer**, or at least it’ll seem that way when the dust settles. Simply pointing to digits on a ledger and saying “we’re rich!”, sadly, doesn’t make it so. Many points of history are debatable, especially when you’re talking about political or social trends, the underlying assumptions behind them, even the veracity of certain obscure events or documentation. But the two things that history is phenomenally good at documenting are wars and money. And to my knowledge, history shows no example, not one, of any political or social structure that has attempted an economic scheme like ours and enjoyed any success.

3) We’re becoming increasingly divisive without actually dividing***. You can thank human nature, you can thank post-post-modern deconstructionism, you can thank the GOP’s Big Tent or the Democrats’ Coalition of the Unemployed, but the more our social order has tried to cram disparate groups of people together, the more those people resist. And it isn’t just about race; religion and culture play significant roles in defining the contours of a recklessly polyglot America, and when you cram enough dogs into a cage and take away their sustenance, violence is as inevitable as the sunrise.

4) We’re getting more impatient. The success and ultimate propagation of a beneficial social order rests on saving things today for the benefit of tomorrow. Whether we will need the surplus to survive an unforeseen problem, or if we can sell that surplus for profit, or simply pass that surplus along to posterity, the concept of “saving” is one of the most important paradigms of perspective in the human experience, because it is one of the few that must be actively fostered. Whether it’s to save a can of preserves for the winter, accumulate a store of cash for future security, or keep an important family heirloom to provide hereditary continuity, time preferences, or simply long-term consideration of future prospects, is foundational to stave off many of the base ills of the human condition. Tomorrow will come, whether you plan ahead or not.

5) We’re already standing amid the ruins of our**** own design. Following decades of the best and brightest***** ceaselessly working to break down the foundations of social order on an endless parade of grounds, we shouldn’t be at all surprised that they succeeded. We let it happen. We let the modernists, post-modernists, post-post-modernists, deconstructionists, post-deconstructionists, post-structuralists, and critical theoreticians fester and metastasize to the point where the cancer touches nearly every vein of contemporary Western existence.

5a) Western Civilization would never have existed without Christianity. Little surprise that the enemies of the West and the enemies of Christendom are conveniently one and the same. The war on the West has been a war on Christendom, suppressing and eliminating it from quotidian life, and corrupting much of what remains nominally Christian to the point of encouraging a perverted and diabolical form of assisted cultural suicide. The restoration of the West is not possible without the restoration of Christendom as the central focus of Western life.

This is the basic outline. Each of these sections (at least) will get their own post in the weeks ahead, and expect much cross-referencing between them. If at the end of it you still do not wish to hoist the Crusader’s Cross and take back your birthrite, I cannot help you.
And away we go.
* I don’t like this term, but for lack of a better one, here we go.
** Sure, most of the existing “wealth” is illusory, but hey. Easy come, easy go.
*** Yet.
**** Pronouns of Royalty are +5 throws against genderqueers.
***** They have science degrees!

Ladies of the West: Kitten Life