I’ve always felt comfortable referring to Democrats and progressives as Communists. When you compare their platforms, strategies, and propaganda, they are virtually identical. Think about it! They call themselves progressive, but into what are they progressing?
Well as it turns out, they aren’t even trying to hide it any more. The New York times tweeted a positive endorsement of Communism recently.

Communism once gave ordinary Americans a sense of their humanity https://t.co/YExSCMam79 pic.twitter.com/LLkZ94RQzw

Bernie Sanders ran as a “Democratic” Socialist. I remember an ad where a young hip indeterminate-ethnic man was earnestly pleading with Trump supporters to band together under Bernie in order to defeat Hillary, because if “we just give socialism a chance”… blah blah blah. 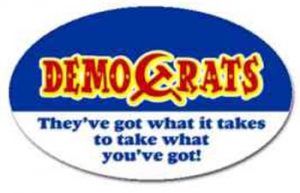 So what is the point in calling these people Democrats or Progressives? Why let them hide behind a kinder, gentler name? These people seek to put into power the same political establishments that killed an estimated 150 million people in the 20th century alone. They are commies. Anti-Fa are commies. Black Lives Matter are commies. Feminists are commies.
It’s telling that Marx called his followers useful idiots. Because only idiots believe​ that anything is free, much less things like food, healthcare, and education. Only idiots believe that giving all power and money to a small elite will make everyone else prosper.

The Father's Chastening of His Sons

It’s Time to Break the Idol of Democracy

Editor’s note: Here is another article by our friend, Ruricolus. A pattern has emerged in our

Americans must take up every fight they can in every place they can. These are our

Originally posted at Laramie’s place. I always make the mistake that everyone is on the same

Closing Ranks Against Us

Editor’s note: Here is an article by our friend Hephaestus. The prevailing operating division in the