Editor’s Note: We present another great article from one of our Ladies of the West, Heidi. You can read more of her great posts on her blog, too.

Watching the recent Antifa videos taken in Austin, Texas, I can’t help but be unimpressed with what passes for modern rhetoric. Color me less than convinced by those pitiful little passels of sadness called Antifa.
Surprisingly, “F*#k you” has risen above mere vulgarity. Moving into the realm of educated speech, it is now intended to defend the veracity of one’s right to protest. Profanity is the next wave in philosophical brilliance.
I had no idea.  I thought excessive foul language was used when people without an adequate vocabulary or education attempted to appear forceful. 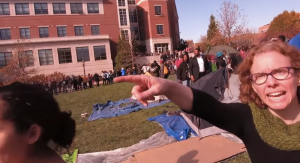 These modern day scholars and philosophers, when cornered and asked to defend their position, seem incapable of anything but screeching endless curses in lieu of an attempt at persuasion.  Like harpies on parade, high-pitched, wispy voices prattle on, parroting their tired bylines and empty slogans, while the faithful skitter nervously from place to place.
All the Communist heroes would hesitate to be identified with people who openly say their strategy for winning is to continually fail.
What do Communists know of failure?
Historically, only when applied to any government that has chosen to implement it has Communism failed.  Independently and on American university campuses, however, hope springs eternal.
Stalin was no quitter.  He killed roughly 20 million on his rise to fame and glory.  Failure simply wasn’t an option for him, and his genocide proved it.
Of course, being a soldier, he knew what to do with a weapon and probably wouldn’t have taken an empty gun to a demonstration either.  He’d also have known where to put his trigger finger, that hard right bastard.
What about the other Communist heroes?   Mao?  Now, there was a determined guy.  Around 45 million dead in the four years of his Great Leap Forward!  He didn’t understand the meaning of the word “no.”  In the case of China, his refusal to be deterred meant the rape and subjugation of an entire nation.
For the Commie win, right?
In retrospect, it seems certain that Mao and Stalin didn’t succeed by twerking in front of the White House or screaming obscenities at the locals.
Because our American exceptionalism trumps everything, even common sense and reason, we are expected to read between the lines and understand that if we are the communists, then it’ll work. This time. Glitter nail, pinkie swear.
Millions of starved, oppressed, and murdered people would say otherwise, but what do they know?
To be fair, I don’t know a lot about the corporate protest. I’m not a paid combatant who doesn’t have a day job.
In the good old days, when professors of gender studies and sexual deviance, or entitled rich kids who think wifi is a basic human right, didn’t make up issues to validate private special interests, people existed who actually understood the value of hard work and determination. Sacrificing and suffering hardship to combat injustice and the indiscriminate abuse of power, they were willing to lay down their lives to aid their fellow man.
Men devoted their entire fortunes, health, passions, and even their own freedom, to aid in the betterment of those less fortunate than themselves.  These men of conscience and integrity transcended creed and economic status to raise the standard for the downtrodden. Lives were lived for a much nobler purpose than joining a ragtag group of flunkies who mask themselves and taunt any representative of authority in a mish-mash of rehearsed phrases intended to be astonishing, while merely appearing weak and childish.
An army without culture is a dull-witted army, and a dull-witted army cannot defeat the enemy.
What is culture? The dictionary says it’s “the arts and other manifestations of human intellectual achievement regarded collectively.”
Intellectual achievement looks like persuasion in the words of William Cowper in 1782, as he argued for the emancipation of the British slaves;

We have no slaves at home – Then why abroad?
Slaves cannot breathe in England; if their lungs
Receive our air, that moment they are free.

Culture is the arts.  Aristotle says, “The aim of art is to represent not the outward appearance of things, but their inward significance.”
The soul of a culture is expressed through the demonstration of beauty, light, and a divine reflection of creativity.
Sort of like when Antifa yells, “F@*k you.  F@*k Trump.  F@*k you, fascist.”
It is difficult to find intellectual achievement or the arts in shameful, self-indulgent, destructive demonstrations of a corporate masked temper tantrum pretending to be important.  “Hey, look at me!!! LOOK AT ME! I wreak havoc on your town!”
This is what passes as discourse today, and certainly, I am not alone in saying that I am sick of it.
Pulling a little red wagon full of flags, holding weapons as though handling snakes, viscerally triggered by innocuous hand signals, screaming “fascist” and “racist” long enough and loud enough that the words no longer weigh anything, they have made a joke of themselves. Bearing the full weight of a lifetime of unresolved daddy issues, they demand to be taken seriously.  They have a Cause.
We are to be persuaded by their incessant use of meaningless insults?
Today, who believes anyone who advocates, in the fight of exposing injustice, that to really communicate the finer points of expressing outrage, fat men and masculine women should be applauded while they “make out” in public, while bravely parading men in dresses and dog collars? Plumbing the depths of a shallow collective repository of war games, they have historically determined that a dance party in short shorts qualifies as reasoned and rational appeal. It seems they truly believe this will resonate with the hearts and minds of their fellow citizens. Middle America shall be overcome and convinced by gyrating hips and middle aged dominatrices.
Can it be true that the only way to really bring about change is by the excessive use and demonstration of jazz hands?
Gosh, if only the 45 million people killed by the Antifa-darling Mao could have known the power of the F-word and the rhyming chant.
Those rhyming chants, though.  Mmmm. So convincing.


Those crazy Communists and Socialists, they said homosexuality was linked to fascism. If only the poor fools in Stalin’s gulags could have understood their basic human right to thong underwear and gender reassignment.  They might have danced their way into the collective’s good graces.
Who was it that talked about the dull-witted army?
That would be Mao.  It seems even he would have walked away from their pitiable display.
Jazz hands for justice, indeed.
Go home, Antifa, you are making an ass of yourself.
Share this

The Time Has Come to Pray