Covenant of Peace, B’rit Shalom in Hebrew.  In the Torah scroll, the spelling of shalom in the phrase b’rit shalom is very suggestive, to say the least.  It is spelled with a broken vav.  The letter vav is the sixth letter of the Hebrew alphabet.  According to the majority of commentators, where the zeal of a Pinchas is required is where shalom, peace, has been broken; and the main objective of Pinchas is restoring that peace between man and God.
Rabbi S.R. Hirsch comments:

The realization of the supreme harmony of peace is entrusted by G-d precisely to that spirit and to that activism which thoughtless people  – anxious to mask their passivity and neglect of duty as “love of peace” – like to brand and condemn as “disturbances of the peace.”   [However] one may never sacrifice for [peace] the rights of others  . . . or what G-d has declared to be good and true.  There can be true peace among men only if they are all at peace with G-d . . .

What saved the people was not the apathy of the masses, nor even the tears of sorrow shed by those who stood idly at the entrance to the Tent of Meeting.  It was the brave act of Pinchas that saved the people and restored to them peace with G-d and His truth, thereby restoring the basis for true peace.

In other words, as our Sages relate, God did not forge His covenant of peace with the  feeble and the complacent, nor with those who are wont to advocate for a moderate and middling philosophy, to johnny-come-latelies who decide to take up a good cause only after it has gained a sufficient number of adherents that the cause no longer requires any defenders. 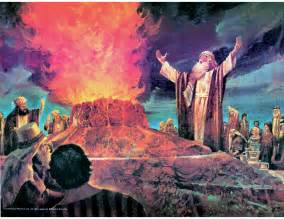 God promised His covenant of peace to men who, in word and in deed, demonstrate the spirit of Pinchas (Phineas).  These are precisely the individuals who are so often mocked and condemned as troublers and disturbers of the peace (remember Ahab and Elijah), individuals who are are not afraid to speak up and speak out in the name of God against every form of opposition to what is true and what is right.   Peace will only be realized when the truth, to which and to Whom all men will someday bow, reigns supreme; and it is these men who are deeply committed to championing the truth to whom we owe an incalculable debt of gratitude for promoting and increasing true peace in this world.
If there remains but only one man, like Pinchas, one man among myriads of ten thousand upon ten thousand, who is bold and courageous enough to speak up for the truth and defend it with all his heart, soul, and strength, then all the more powerful and penetrating will be his words and that much more significant and meaningful will be his deeds.  In fact, the greater number his opponents, the more will he act as a champion and savior of the very ones not only against whom, but also for whom he is fighting.
Has not such a man accomplished that which all others should have striven to achieve themselves?  Even if all men will be against him and he were to remain all alone in this world, the covenant of peace, as far as God is concerned, is a promise that is absolute; and God will not permit the words of such a man to fade into obscurity or let his actions be forgotten.  An eternal priesthood was promised as a direct reward for Pinchas’ decisive actions on behalf of truth and righteousness, an act which God declared had served to atone for all those around him who only stood by silently, paralyzed by fear and apathy.  And the plague was stopped.
This episode speaks of Another Who was to come, One Who proclaimed Himself to be the embodiment of truth, the very truth itself no less.  This One would take the most decisive action the world has ever known, an action which opened another way and offered life and peace to everyone languishing under the weight of their sin.
The letter vav is also the number six in Hebrew and the number of man, for on the sixth day God created man.  To say humanity is broken is an understatement, and we are certainly guilty of breaking our peace with the Creator of the universe.  But One greater than Pinchas has come, and in that same spirit of zeal and with that one decisive act has restored forever that which was lost.  The very One who reassured our hearts with these words:
“Peace I leave with you, My peace I give to you; not as the world gives do I give to you. Let not your heart be troubled, neither let it be afraid,” and reminded us that “these things I have spoken to you, that in Me you may have peace. In the world you will have tribulation; but be of good cheer, I have overcome the world.”  (cf. John 14 and 16)

The Land We Love