Recently, I have been watching (or, more accurately, re-watching) lots of old movies. Partly, this is because there are lots of garbage movies being made today, pushing leftist and decidedly non-Western agendas. On the other hand, these old movies are just flat out good. I do not mean that every old movie is worth your time, but those movies that are still shown regularly, or at least occasionally, tend to be fine films. A case in point is the John Ford classic Fort Apache. I just watched it again, and a few things stood out to me that I thought were worth sharing. Some of these items are about the movie itself, its cast, and its theme, while some are lessons we might learn from it. 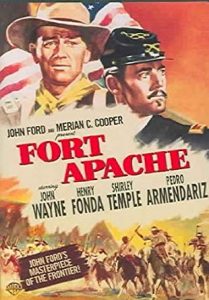 If you have not seen the movie before, then stop reading and go watch it. Do it now. This is a great movie, and helped redefine what it meant to be a good western. Starring John Wayne and Henry Fonda, the supporting cast has quite a few well-known stars, as well: Shirley Temple, Ward Bond, John Agar, and others.
The stars are aligned to the exactly correct roles. In real life, John Wayne and Ward Bond were well-known conservatives, who were not afraid to put their politics before the public. Wayne would go on to make many pro-American films and documentaries, supporting the troops and decrying communism. Bond was also a public conservative, who even campaigned for Nixon in 1960, right up to his death a few days before that election. In Fort Apache, these two are the most level-headed and wise characters amongst the soldiery. Wayne portrays Cpt. York, a trusted and admired leader, while Bond is the battalion’s Sergeant Major, O’Rourke.  They both know their opponents, respect them, and try to use logic, strategy, and tactics to achieve the desired outcome. They realize that they do not know everything, but always do their best. Both had been valiant fighters during the War Between the States (both Yankees), with Bond’s character even earning a Medal of Honor. They work hard, know what needs to be done, and keep doing their best to do the right thing.
Henry Fonda, of course, was a famous Hollywood liberal, and his character in the film is an egotistical, arrogant, inflexible man. The new commander at Ft. Apache, Lt. Col. Thursday, he is not without strength or value, but is so focused upon himself and his own legacy (and what he views as a slight by being stationed at Ft. Apache), he allows his judgment to be clouded by his narcissism and view of class. His specific animosity is put upon the son of Bond’s character, who is a recent West Point graduate. Though a young officer, as the son of an enlisted man, he is not viewed as being worthy of Thursday’s daughter (portrayed by Temple). This faulty view of the people under his command and his disdain for his opponents, the Apache, lead to his downfall. His one strong trait is a demand for discipline, but even there, he is unable to view each action individually, but adheres to a strict reliance upon regulations.
The movie is hailed as the first major film to portray Native Americans with sympathy and respect. York and Sgt. Major O’Rourke both respect the Apache, and do not harbor favorites amongst the soldiers. If a soldier is capable of accomplishing a job, then the rank and background of that man is not relevant. York eagarly asks for a former Confederate soldier to help him in a meeting with Cochise, leader of the Apache. It is a true meritocracy with them. Not so with Thursday, who cannot fathom that the Apache are anything more than a uncouth band of dimwitted savages. He scoffs at the idea that they might be capable of using military strategy. He believes only officers are capable of gentlemanly behavior. 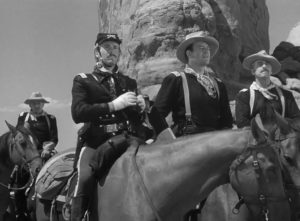 How like the leftist agenda! It is fitting that Fonda played such a role, as the worldview that he supported has the same point of view. They look at any who might disagree with them as less than cultured or worthy of respect. They decry anyone to their right as hateful and bigoted, incapable of producing good ideas. Like Fonda’s character, they fail to realize that their opponents are intelligent, strategic, and able to do great things. In the end, Thursday pays the  ultimate price, just as Leftists will.
Interestingly, Wayne’s character refuses to tell the truth about Thursday’s failed leadership and allows the media to put a positive spin on the final confrontation, because he knows that it is better for his regiment. While Thursday’s foolhardy orders led to the death of many men, accomplishing little, the media spin had created the myth of “Thursday’s Charge,” which gave prestige to the regiment. Again, York allows this, as it is the one thing that Thursday was actually able to accomplish for the troops.
The director, John Ford, was another famous Hollywood conservative, and he handles the film with a deft hand, which does promote Hard Right views. I am not saying that he intentionally did this, as he was simply telling a story, but his views are evident.  We can learn a lot from these old movies. Times may have changed, and there are few true conservatives in Hollywood any longer, but we take solace in the fact that some of these great classics were able to promote positive values, showing Leftist idealogy for what it is – a road to nowhere.