After my Keanu Reeves article, it seems that it might be beneficial to give a basic overview of the Strauss-Howe theory of Generations. My earlier article made some assumptions regarding this theory, but the comments indicate that many may not understand what this particular view actually espouses. As I commented there, I am not an expert on this topic. I  have simply spent quite a bit of time recently immersing myself in it. I do have a basic understanding of the overview, especially regarding the past century. Admittedly, besides a quick, cursory look at earlier eras, I tended to focus my efforts on those that have a direct impact on the present. 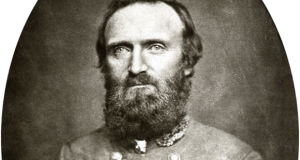 Sure, it is pretty cool to look back at  history and see important figures who fell into the same generational archetype as Gen X. I mean, really, great people like George Washington and Stonewall Jackson fit this profile. Pretty august company. We can enjoy a sense of camaraderie with them, but ultimately, if we want to really delve into what is going on now, we can push them aside for the time being and focus on what is happening now.

As such, the purpose of this article is simply to provide a quick overview of Strauss and Howe’s 4th Turning viewpoint, explaining what they mean by Turnings and Generations. As to the age ranges, I will rely on Strauss and Howe. I realize we might quibble over exactly when one generation began and another ends, but this is sufficient for our purposes.

Generational Archetypes
There are four archetypes. They repeat in a regular order. This has happened over and over, and Strauss and Howe have studied back to 15th Century, following this trajectory forward.

Prophet – these folks tend to be born after some major societal crisis, once things have begun to settle down. They are pampered, enjoying the fruits of the earlier generations’ sacrifices to deal with the earlier crisis. Culture has been through a seismic shift, with many old social edifices being torn down and replace by a new sense of societal order. They tend to be passionate and principled. As Prophets enter young adulthood, they tend to be idealistic, and begin to question authority and the way things are. They did not suffer through the crisis, so do not have those things as part of their collective memory. In our own time, the Boomers (Born 1943-1960) would fit this archetype.

Nomad – as the Prophets begin to speak against the current social order, attention is turned away from children. Whereas Prophets tend to be indulged, Nomads are often neglected. They grow up alienated, as society has begun to deal with the generation before them. There is simply not enough time to also pay attention to this newer one. Nomads figure out their own way, rather than following their elders blindly. As youth, they tend to be wild and uncontrolled. As young adults, they learn pragmatic ways to navigate life. They are not idealistic, but use a very rational “get it done” approach to work and life. As they age, they become effective leaders, who get results. Gen X (Born 1961-1981) fits this archetype.

Hero – as Prophets continue to age, they realize that neglecting children is not the best option, so they turn their attention to this new generation. While the Nomads are basically skipped, as far as hands-on parenting goes, this next generation is doted upon. All the turmoil of the Prophet’s questioning of society dies down, and things enter a smooth phase. This is where the Heroes grow up. Life is good. Things tend to be peaceful. Unlike the isolated Nomads, Heroes like to work in groups. Networking becomes important for them. They are builders. They are optimistic, and hold civic engagement to be important. GI (Born 1901 – 1924) and Millennials (Born 1981-2004) fit this archetype.

Artists – as Heroes enter young adulthood, a new crisis emerges, often a major war or severe economic upheaval. This is the time in which Artists are born and pass through childhood. As much as Heroes were protected and indulged by their parents, Artists are over-protected (helicopter parents, anyone?). By the time they enter young adulthood, the crisis  has been resolved, but it leaves a mark on their collective psyche. They tend to focus on flexibility and consensus-building. They are usually sensitive, but in a good way. They are fair minded. In our own time, we have two generations still living who fit this archetype – Silent (Those born 1925-1942), and Gen Z/Homeland (those born post 2004, and are still being born).

High – Here, the crisis has just been resolved. Things are good again. Much of what had been an integral part of society has been dismantled and replaced with a new societal order. The prophets begin to die out, replaced in old age by Nomads. Heroes enter middle age, while Artists enter young adulthood. New Prophets are born. Society has a clear goal and purpose. The earlier crisis  has sharpened the culture’s focus.  For a modern example, consider the American culture after World War II. Social Order was high, both in the desire for it and the availability of it.

Awakening – This is when those young Prophets enter young adulthood and begin to question the existing social order. Old Nomads begin to die off, Heroes enter elderhood, Artists to middle age, and new Nomads are born. Those cultural institutions are attacked in various ways, with the energetic and idealistic Prophets searching for more autonomy and individuality. While the earlier High had been stable, it is now looked upon as a form of cultural poverty. Here, while the availability of social order is high, the desire is weakened. For our time, think of the cultural awakening from the mid-1960s through the mid-1980s.

Unraveling – Here, the older heroes begin to die off, replaced by Artists in old age. Prophets are middle aged, and Nomads are young adults. New Heroes are born. Here, the attitude is pretty much the polar opposite of a High. Cultural institutions are fully distrusted and viewed as weak and counterproductive to a healthy society. Individualism has taken hold of the culture. Both the availability and desire for social order is low. Social edifices are torn down and discarded. There is more chaos and less cohesiveness in the culture. For us, focus on the era from the mid-1980s through 2008 or so. This was the time when decidedly “Big Government” President Bill Clinton proclaimed that “the era of Big Government is over.”

Crisis – we reach the decisive turning point in this cycle. Artists begin to die. Prophets enter old age. Nomads enter middle age. Heroes become young adults. A new generation of Artists is born. Ultimately in a Crisis, the old order is completely torn down and rebuilt anew, with a fresh set of social structures. This new order is framed by the perceived crisis itself, with might be a singular “enemy” or a series of events that shake the society to its core. Individualism begins to be replaced by a more cohesive social culture, as people learn to work together to overcome the Crisis. So far in American history, the resolution of the Crisis has led to a major shift in cultural identity. The end result? A new High. So we begin the process again. We are currently in the Crisis phase. 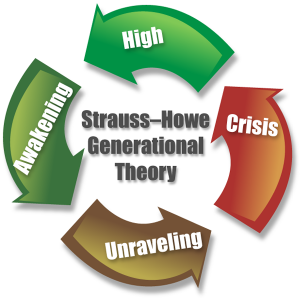 So what does this mean? Here is how Strauss and Howe explain it:

As America moves into a Fourth Turning, this will be a time of great national trial and upheaval. Yet seeing this on the horizon is not a prophesy of some horrible tragedy. A Fourth Turning also could be a time of triumph. Just as the risk of war is great in a Fourth Turning, so too is the possibility of accomplishing things that in other eras would be impossible—particularly in the areas of government, institutions, and infrastructure. It’s important to remember that Fourth Turnings have occurred many times before in American history. Each has been an era when America felt good about itself as a society and a nation, a time when big problems have been solved, when businesses ultimately emerged prosperous, and when people came together with a new ethic of community and consensus.

Today, Boomers are the older leaders. Remember when Bill Clinton was elected as the “young Boomer” president in 1992, at the age of 46? Yeah, he will be 71 this year, as will George W. Bush and Donald Trump. They are no longer the young idealists, but the old folks. They still serve as leaders and elders of the culture, but by the end of the Crisis, most will begin dying off. Gen X serves at the epicenter of Crisis eras. They are the ones who are of the right age to lead the society through the turmoil, and their chaotic upbringing has made them singularly suitable to do it. They are pragmatic, effective leaders. They do not play the games that other generations play. They do learn to work together, but only to win. Millennials will emerge from the Crisis as the leaders of the new high. They will see their collective understanding of the world shaped and redesigned, as they come through the crisis. They are the ones who will take the new world given to them after the crisis and establish the new order. Gen Z/Homelanders will grow up during the crisis and it will have a major impact on how they view the world. They will adhere to the new order and support it.

What will that new order be? No one knows. What we do know is that if Strauss and Howe are correct, and so far in American History, they seem to be spot on, then we are in for a very adventurous decade or so. By 2030 or so, we should have a better idea of what the end result will be.
My suggestion is that you figure out where you fit in this cycle. Do not be what you are not. Know your place and what you can contribute. And, as stated in my Keanu Reeves article, linked above… realize that Gen X will be the one who pulls this thing off.

The Gods of the Copybook Headings