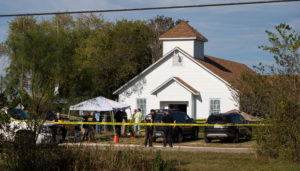 It has only been a few hours since Devin P. Kelley entered a Baptist Church in rural Sutherland Springs, Texas. He killed at least 26 people, as of the latest report, and wounded many more. Honestly, there is so much speculation and wild rumors screaming across the internet, that at this point, it is hard to know exactly what is true and what is not. Rather than feed into that maelstrom, I will just point out what we do know (or are at least fairly sure about), and what it means for Men of the West.

So taking those things, what can we learn?
Kelley was in possession of a firearm, but if it is true that he had been dishonorably discharged, his possession was illegal. So leftists crying about the need for gun control laws are out of luck. The law already said he could not own one, but he had one anyway. This is prime evidence of the futility of gun control. If his discharge was a Bad Conduct Discharge, then this point is not relevant, of course. The following points are, though.
Most of the big shootings lately have been done by leftists. For all the wailing of the Left about the mean, angry, dangerous Right, reality shows that is the deranged Left that is truly the threat. Now, don’t get me wrong – there are kooks on the Right, as well, but we have seen very few of them engage in this type of behavior. The Left has provided plenty of cultural violence, though.
The fact that Kelley seemingly knew no one from this church, but simply chose it at random (or for some as yet unknown reason) shows that sometimes stuff happens. You can be minding your own business, doing nothing to perturb anyone else, and still find yourself in the middle of horror and tragedy. This should remind you to be prepared. You should be carrying a firearm at all times. At your churches, places of business, and anywhere else you go, be prepared to defend yourself. You should also be capable of using your hands, so learn to fight, whether boxing, martial arts, or some other method. That also means you need to be in shape. If you are fat and sluggish, then it is time to get your butt up and moving. I recommend you search for “Beast Life” on this site.
At your churches, there should be armed men who are prepared to defend the worshipers. You can organize it how you want, but someone needs to take the responsibility for providing some form of security.
Though I have already mentioned the fact that gun control is not really part of this whole situation, beyond the fact that it doesn’t work, notice who the primary hero was. A local resident who engaged the shooter with a firearm. This law-abiding citizen used his personal firearm to come to the defense of his fellow citizens. It might be that the number of victims would be much higher had this man not stepped in. I will also note that the Texas Attorney General has called for more Texans to use their concealed firearms to stop these types of attacks.
Finally, the resilience of those who are truly of the West is evident. These Christians, formed in the culture of the West, endured a terrible tragedy, assessed their 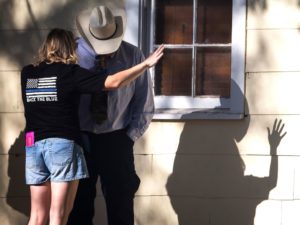 situation, and as soon as possible, pushed the horror from their minds and began to provide aid to the wounded. Of course, they will all have to deal with this in their nightmares for the rest of their lives, but they did not just shut down and hope someone would come save them. No, they did what had to be done. We can learn from their example.
Now, I am sure we will be learning more about the background of Kelley and the details of the actual shooting. For now, the most important thing we can do for the victims and their families is to pray for them, and if possible, send some financial support to the local organizations who can actually provide some meaningful help.
Even in such tragic events, we can learn something. Don’t let this go by without evaluating your own situation and how you can make it more secure, preparing for potential danger.

Sermon: O Wretched Man That I Am

And The Angels Wept…Because You Failed