In 1992, Patrick Buchanan interviewed his former boss, President Richard Nixon for CNN’s Crossfire. We have a great cut from that interview, located at the bottom of this article, and it is well worth the 3 ½ minutes it takes to watch it. From it, we learn a few important things about the Kennedys (Ted was the best politician; John was more reserved, but was also talented; Bobby was passionate, like a Jesuit Priest). 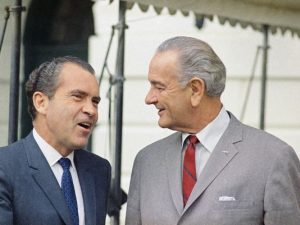 Nixon also offered his opinions on the most talented politicians amongst 20th Century presidents, proclaiming that Theodore Roosevelt, Franklin Delano Roosevelt, and Lyndon Johnson were unparalleled in political talent. However, in an off-camera discussion with Buchanan, Nixon gave more insight into Johnson.
Referring to a recently published biography, Nixon stated that it was horrible, whispering that it made Johnson look like “a Goddamned animal….of course, he was.” This elicited a chuckle from Buchanan, whereupon Nixon continued, “but he was a man.” Of course, we know Nixon was not fond of Johnson, so why would he say such a thing? How could he take such a pejorative description, call it “terrible” and then turn it into a positive for his own former political opponent?

Later in the video, Nixon describes the essential temperament for a good president.

He builds up on that theme in the later portions of this video clip, discussing his time as Eisenhower’s VP. He argues that the President is so vital to the nation that his subordinates, whether members of the cabinet, VP, or even just a congressional member of the President’s party, should be willing to take the hits, sparing the man at the top. Nixon argues that it is their duty to do that, in order to spare the nation unnecessary turmoil, saying that if the VP or cabinet member goes down, it won’t really hurt the nation, but if the President does, it can be traumatic.

It is important to remember that Nixon is looking at big picture issues here, not specific politics and policy. Certainly, he would disagree with much of FDR and LBJ’s policies, while admiring their skill and political prowess. Don’t miss the forest for the trees here. He is looking at the type of man who has the potential to be a good president. Temperament alone is not enough; it takes proper understanding of the world.

So what do we learn from this Nixon interview?

First, he was an astute observer of 20th Century politics, and his views and opinions are worthy of consideration. Second, he had an insider’s knowledge of what was needed to be a successful president. Of course, himself a failure, he knew that much of the nation’s trauma post-Watergate could have been alleviated, had a subordinate stepped up to take the hit, though he never makes this point himself. He willingly takes the hit himself.
Finally, we might consider how his description of a proper presidential temperament might be applied to Donald Trump, since he was recently elected to be the 45th President.

Is Trump warm on the outside? He certainly can be. All reports from those who know him speak to his kind and caring nature. Certainly, he can be prickly and pointed, but so could both Roosevelts and Johnson, who all garnered Nixon’s admiration.

Is Trump warm on the inside, or is he cold, tough, and a good decision maker? Since his catchphrase from The Apprentice was “You’re Fired!,” it would seem that he might well have the proper temperament. Couple that with the fact that he has led multiple successful businesses, and we can assume that he is able to make the hard calls, when needed. He certainly has little fear of failure.

Of course, we do not have to rely on our logic to determine what Nixon would think of Trump as president, since the former president sent the future one a letter, proclaiming that he knew that if Trump sought the office, he would be successful. Nixon saw Trump’s potential many years ago. Nixon knew what it took to be a good president.

Now, it is up to Trump to use that temperament, and follow through with appropriate policies.