Nathanael Greene was a true Man of the West. Oddly enough, those who first met him often discounted his strength and attributes. You see, Greene had a pronounced limp and had no formal training in military matters. It did not matter that he helped form a militia in Rhode Island in 1774. Not only did he suffer from physical ailments, he was raised a Quaker. That meant that he was brought up to be a pacifist. But when the British began imposing unfair and unethical regulations on his people, he acquired numerous books on military tactics and strategy, and became a master of warfare. He was so zealous and unyielding in his battles with the Redcoats that he was expelled from the Quakers.
Yet he did not stop.
Given the rank of private, though a founder of the militia, it did not take long for General George Washington to recognize Green’s talent. By 1775, he had been promoted directly from private to Major General. Washington had little time for niceties, and saw that Greene was well-suited to lead troops. And lead them he did.
He was placed in charge of armies in the New England area, but eventually found himself in the Southern states. Though leading a ragtag group that was outmanned and out provisioned, he used tactical retreats to consolidate his army, and earned fame at the Battle of Guilford Courthouse, where his troops engaged the British Commander General Lord Cornwallis. While the battle was technically a victory for the British, as Greene eventually ceded the battlefield to Cornwallis, the Continentals had inflicted so much damage to the English that Cornwallis soon left North Carolina. Greene allowed this with little harassment, deciding to retake lands to the south, through North Carolina, South Carolina and Georgia.
It was this battle that forced Cornwallis to move north into Virginia. After retaking the Carolinas and Georgia, Greene’s army re-engaged Cornwallis, forcing the British troops to the coast. Cornwallis eventually lost his final battle of the war at Yorktown. He also kept the remaining British troops in the south penned in Charleston, South Carolina, after the Battle of Eutaw Springs. 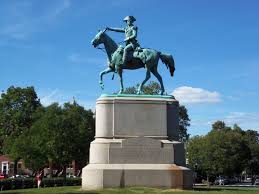 While Greene lost every face-to-face battle he led, he excelled in dividing, eluding, and tiring his opponent by long marches, and in actual conflict forcing the British to pay heavily for a temporary advantage, a price that they could not afford. It was this strategic approach that helped lead to the overall American victory. It was truly a case of losing the battles to win the war, and it worked to perfection.
Washington held Greene in such high esteem that it is believed that the Commander in Chief intended for Greene to take over as the commander of the American army in the event that Washington was ever incapacitated. Not bad for a guy that started the war as a private with a gimpy leg.
Greene married Catherine Littlefield in 1774, fathering five children who lived past infancy. After the war, like many others of his generation, Greene faced difficult financial circumstances, though North Carolina, South Carolina, and Georgia all ceded him large tracts of land. He actually sold most of this to pay for provisions for his troops during the war.
Twice offered the post of Secretary of War, Greene refused both times, settling on one of his remaining estates, in Georgia. He died there in 1786, at the age of 43. He was one of only three generals to serve during the entire eight years of the war (George Washington and Henry Knox, being the others).
Like Washington, he had the great gift of using small means to the utmost advantage. His attitude towards the British was humane and even kindly. He even generously defended Horatio Gates, who had repeatedly intrigued against him, when Gates’ conduct of the campaign in the South was criticized.
For his actions at Eutaw Springs, the Continental Congress awarded him a Gold Medal.
He was a true American hero and a fine example of a Man of the West.

Logan: A Tale Of Redemption