We can imagine that most of the colonists to the new world were hardy folk. They were leaving civilized society, for various reasons, and coming to an untamed,  harsh wilderness in America. Sometimes, we might forget that when the Jamestown colonists first arrived, they did not find an already-built home, much less town, awaiting them. They found nothing but dirt, trees, antagonistic natives, and severe conditions. They carved out their houses from that wilderness and forged a civilization. It did not happen overnight, but took decades, and the building took longer than one generation. 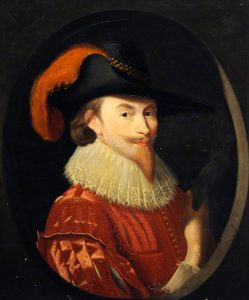 He was not part of the original cohort who arrived on these shores, being born in 1647, but Nathaniel Bacon was one such man, willing to step up and do what was needed. He is most well known for being the leader of “Bacon’s Rebellion,” a precursor to the American Revolution. In fact, is is often posited that had Bacon not died from a fever, while in the midst of his rebellion, Virginia would have been a free colony a century earlier.
Bacon was born in Suffolk, England, to wealthy merchant parents and attended Cambridge. After a minor scandal back home, his father gave him some money and sent him to America. A charismatic young man, Bacon bought a couple of “frontier plantations” (do not equate those with the plantations of later generations), and soon was appointed to the Governor’s Council. He was a friend of Governor William Berkeley.  He was respected and quickly rose in the Colonial culture, recognized as a leader, someone trustworthy and dependable.
It is important to keep in mind that Bacon and Berkeley were close, as it demonstrates that Bacon’s later actions were based upon doing what was right, rather than what was convenient or intended to keep “polite company” content.
As the Europeans carved out their civilization, the natives attempted to thwart those efforts. The Indians were troublesome and began raiding homesteads, killing the colonists. The White colonists demanded that the governor enact policies to drive the Indians out of the area. However, Berkeley had taken a more friendly approach to his dealings with the natives, and while making some overtures, playing politics, and pretending to acquiesce to his constituents’ demands, the natives were not really dealt with. Coupled with the corruption of Berkeley’s administration, which Bacon had the opportunity to witness, being part of the governing council, led Bacon to take steps to alleviate the situation.
In the midst of Berkeley’s inaction, the Colonists raised a militia that responded to an Indian attack which had killed some of the Europeans, by asking the Indian leaders to parley. Rather than treat with the Indians, the militia killed them. The fighting had spread from Virginia into Maryland, and the Virginians were joined by Maryland militia, while the Maryland governor protested the actions. There were some horrifying retaliations by the Indians, who attacked a village, killing sixty Colonists.
Berkeley, attempting to calm things down, proposed that forts be built on the frontier areas, but did not really address the underlying problems. The Colonists rejected this plan, and Bacon emerged as one of the leaders of the opposition. One of Bacon’s plantation foreman had been killed by Indians, and when Berkeley refused to grant Bacon a militia commission to engage the Indians, Bacon did it anyway.
Berkeley proclaimed  him a criminal and rebel, but this only enhanced Bacon’s reputation. Henrico County even elected him as Burgess to represent them. This governmental body enacted sweeping reforms, but not enough to satisfy Bacon or his followers. Under pressure, Berkeley finally granted Bacon his commission, then retreated to his fortress. Bacon led his militia into the field, but had to spend time acquiring the necessary supplies to complete their mission of driving out the Indians.

On July 30, 1676, Bacon and his makeshift army issued a Declaration of the People of Virginia, which criticized Berkeley’s administration, accusing him of levying unfair taxes, appointing friends to high positions, and failing to protect outlying farmers from Indian attack. They also issued a ‘Manifesto’ urging the extermination of all Indians, charging that they did not deserve legal protections because they “have bin for these Many years enemies to the King and Country, Robbers and Thieves and Invaders of his Majesty’s Right and our Interest and Estate.”

Turning their attention from the Indians to Berkeley and his government, months of battle between Bacon’s men and Berkeley’s troops ensued, including an attempted naval attack by Bacon’s followers. In September, 1676, Bacon’s troops burned Jamestown, the capital. On the whole, Bacon’s forces had been steadily gaining ground and there was every expectation that he would have been successful in overthrowing Berkeley.
Yet a month after the burning of Jamestown, Bacon was dead. It is not clear exactly what killed Bacon. It may be that it was simply a fever, or perhaps dysentery. Regardless, at 29 year of age, Bacon was gone. Soon thereafter, his troops fell apart, and the rebellion was stamped out. It had been Bacon’s own leadership and personality that had driven the movement. Berkeley retaliated by hanging over 20 men, most without trial. His actions were condemned by the King in England, who recalled Berkeley from his Governorship.
So Bacon’s Rebellion lasted less than a year, but stirred the hearts of the men who had come to Virginia, and a century later, they took that next step and overthrew their English masters.

Know Your Enemies: The Conservative Establishment