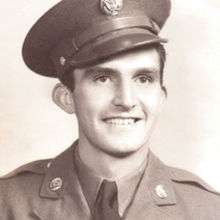 First Lieutenant Donald K. Schwab distinguished himself by acts of gallantry and intrepidity above and beyond the call of duty while serving as the Commander of Company E, 15th Infantry Regiment, 3d Infantry Division, during combat operations against an armed enemy near Lure, France on September 17, 1944. That afternoon, as First Lieutenant Schwab led his company across four hundred yards of exposed ground, an intense, grazing burst of machinegun and machine pistol fire sprung forth without warning from a fringe of woods directly in front of the American force. First Lieutenant Schwab quickly extricated his men from the attempted ambush and led them back to a defiladed position. Soon after, he was ordered to overwhelm the enemy line. He rapidly organized his men into a skirmish line and, with indomitable courage, again led them forward into the lethal enemy fire. When halted a second time, First Lieutenant Schwab moved from man to man to supervise collection of the wounded and organize his company’s withdrawal. From defilade, he rallied his decimated force for a third charge on the hostile strong point and successfully worked his way to within fifty yards of the Germans before ordering his men to hit the dirt. While automatic weapons fire blazed around him, he rushed forward alone, firing his carbine at the German foxholes, aiming for the vital enemy machine-pistol nest which had sparked the German resistance and caused heavy casualties among his men. Silhouetted through the mist and rain by enemy flares, he charged to the German emplacement, ripped the half-cover off the hostile firing pit, struck the German gunner on the head with his carbine butt and dragged the German back through a hail of fire to friendly lines. First Lieutenant Schwab’s action so disorganized hostile infantry resistance that the enemy forces withdrew, abandoning their formidable defensive line. First Lieutenant Schwab’s extraordinary heroism and selflessness above and beyond the call of duty are in keeping with the highest traditions of military service and reflect great credit upon himself, his unit and the United States Army.

When the Well Runs Dry

Counting The Cost Of Girl Power