We Men of the West love literature, as evidence by our recent article on the subject. That does not mean that we do not enjoy a fine manly film, though. There have been many great movies that support our culture, though they are admittedly rare in modern times. Most of these good movies are from the golden age of cinema. One of the greatest is the Oscar-winning classic Sergeant York, starring Gary Cooper, released in 1941, directed by Howard Hawks. 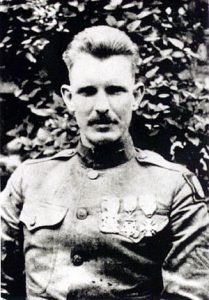 This movie chronicles the true story of Alvin C. York, a Tennessee hillbilly who went on to become one of the most decorated American soldiers of World War One. A notorious hell-raiser in his youth, York experiences a religious conversion, and gives his life to God. Shortly thereafter, the nation enters the Great War and York is drafted. His religious principles, as he understands them, lead him to apply for conscientious objector status, which he is not granted. Forced to serve, he is willing to go and die for his country, but is determined not to kill. Without giving away the entire story, trust me, it is worth watching. The fact that he receives the Congressional Medal of Honor, the French Croix de Guerre, as well as numerous other awards should suffice to give you hint as to how the story turns out.

The strength of the movie is not in the action, but in the inner conflict that the protagonist struggles through. He works hard to save for money to buy land. He dedicates himself to being a model soldier. He cares for others, and fights his inner demons. He struggles with his faith, and how to live his life according to his religious standards. Throughout the story, we see a true Man of the West. He is a man in every sense of the word, and one that we would all benefit from emulating.

Of course, there is a love story, and it is a classic one. Boy meets girl. Girl is a bit scared of his hellion past. She comes to realize that his religious conversion is true, and she gives herself to him wholeheartedly. Make sure you read that last sentence in the 1941 sense of the word. Their relationship is chaste and wholesome, a model of Christian propriety.

The acting is well-done. I mean, Gary Cooper is Gary Cooper, and he pretty much always plays the same guy. That was typical of the great male movie stars of that era. They had one character – manly man. The supporting cast, Walter Brennan, Joan Leslie, and George Tobias are great. They are all upstaged by Margaret Wycherly, who portrays York’s mother.

If you have not seen this gem, or if it has been a while, then do yourself a favor, and watch it. You will be glad you did.

Why You Should Read Classic Literature

First, the bad (mixed with some good). While some comparisons will happen, I’ll try to be

Why Does Woke Writing Fail?

And why do we only respond, as a civilization, to male heroes and strong women who