It’s OK to be white.
It’s not like I can help it. I was born with white skin. Immediately, I was given a tumbler of fine bourbon and a cigar. My life has been a non-stop party ever since. I have a good job. Well… I have a place that I go to ‘work’ that pays me very well. I watch the people of color who actually do all the work for half the pay. Me and my white friends laugh and talk about how great it is to be white. 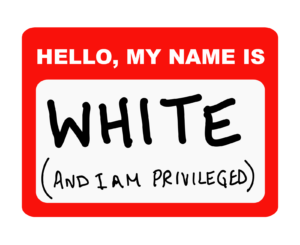 If you listen to the popular culture, that’s what life is like as a white person. Guess what, white people don’t live like the people on “The Housewives of Orange County,” any more than the average black person lives like Kanye.
There are disparate outcomes. How do we explain this? Is it because white people are superior to black people? Liberals can’t allow that possibility, so they have invented the concept of white privilege. White privilege is the assumption that white people have it easier because they are white. The assumption is that because white people have jobs so they have food to eat, their kids aren’t hungry so they do better in school. They raise their kids with both parents in the house, so whites have an advantage. White kids get to go to college, because they can afford it.
This is partly true. There are white kids that come from upper middle class families that have access to the finer things. Well, so what? Isn’t that what everyone wants? Instead of making those people the enemy, emulate them.
Most people can’t emulate them. Most white people aren’t upper middle class. My own parents didn’t get me into Yale. We didn’t eat roast beef every night for supper. We at chicken because it was cheap. Most of the time, we ran out of money before we turned the page on the calendar. But we were happy. My siblings and I all went to college. All but one of us graduated from college. The opportunity was there for us to better ourselves, even though we grew up poor.
Here’s what we didn’t do: We didn’t blame other people for our lower standard of living. We didn’t expect the government to feed and clothe us. I now live a little better than my parents did. I could do better than I am doing.  I recognize that my success, or lack of it, is based on decisions that I made. I chose to live in a rural area; therefore, I make less money. Not your fault. I chose to get a degree. Therefore I make more money than the guy pushing a broom at the local Walmart. It’s not due to privilege.
Leftism, aside from being a mental disease, is the politics of envy. If you don’t make as much money as the Rockefellers, you should. Because they somehow made their money on your back. We should take from those that have earned and give to those who have not. This is wrong. Hard work doesn’t always pay off. The good guys don’t always win. Success isn’t guaranteed. You must recognize that nobody cares about you or your situation more than you do. Nobody has the time or resources to provide for you. You must do it yourself. If you fail, there are good people to help you, but they can’t do it forever. You have to pick up and get after it again.
Race relations deteriorated under President Obama to an amazing degree. My theory is that minorities thought he was going to fix their lives. Liberals have told them for years that they aren’t responsible for their own mess. Here at last was the first black president, but nothing changed for them. So they went back to the standard reason: racism, and they went back to it harder than ever. And White liberals hungry for power are eager to help them lie to themselves rather than help themselves.
White people are holding them down. White people are privileged. Actually, white people are indignant at the accusation, and perplexed as to the reason for it. We haven’t done anything wrong. We’re busy trying to give our children the chance at a better life.