On Palm Sunday, Muslims in Egypt committed two horrible tragedies, bombing Coptic churches in the midst of their worship. At the last report, 44 Christians were killed, and over 100 more were injured. In Sydney, Australia, a Muslim gang, screaming, “F*CK JESUS!” attacked a Christian couple, beating them, while Transport Authorities looked on, doing nothing. Unfortunately, none of this is new or unique. This is what Islam does.

In a recent article, I advocated for the immediate halt to any immigration from Muslim lands, as well as for the deportation of Muslims currently in our country. Where I stopped short, drawing a line in the sand, if you will,  was in saying that we should make every effort to do this via legal means. We should hold our elected officials accountable to make it happen. We should not engage in vigilantism or mob action outside of the law. 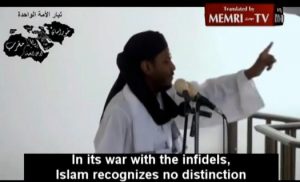 Yesterday, when I heard the news of the slaughter of the Egyptian Christians, I realized that we are soon reaching a point where the removal of Muslims is going to happen, whether done within the law or otherwise. I still do not advocate for mob action; I still argue that we should pursue legal recourse. At the same time, it is obvious that we will soon see this happen, one way or another.

I know some of our commenters disagreed with my call for patience and using the law to our advantage here. I understand their argument, and can sympathize with it. My gut reaction yesterday was to send them all home today, on planes if they are willing, but in body bags, if they are not. But an emotional reaction is not the best way to conduct policy. The Democrats have done it for years, and they have produced nothing but disaster.

So I call again for us to let our government know that we expect them to remove this vile poison from our midst. It is their job and responsibility to provide for a safe environment for citizens. In fact, that is one of the few biblical jobs for government: to protect the innocent and to punish evil doers. If government is going to behave as the Australian Transport Authorities did, this will not end well. It is time for the governments of the West to take a stand.

Islam has proven to be nothing but evil. Innocent people are being hurt, both in this country and across the world. If our government will not do its  job, then someone else will. I hope it does not come to that, but every day the government waits brings us closer to the day it happens. One of my recent articles discussed William Faulkner’s view of the land, and how it was alive. It allowed people to live on it, as long as they were the right kind of people. Muslims have proven that they are not that sort, and in Faulkner’s terminology, it is time they were shaken off of the land, as a dog shakes off fleas.

If something is not done soon, we will see the next Crusade begin in earnest, and that will much bloodier than if we just take care of the problem now.
Send them all home.