The brevity of our married life and the sudden death of her who had brightened my path for a while brought many cards from friends, neighbors, and church people and others to express their sympathy in my bereavement. Through it all I experienced the Lord’s sustaining grace. His Word comforted me to bring to my mind: “The Lord rules and directs all things for our good”, and “all things work together for good unto them that love God and are called according to His purpose,” etc.

At first, Nellie and I lived upstairs at 705 Eastern Ave, but she preferred to live downstairs. Therefore we looked for a house. Daily I scanned the For Sale column in The Press. One day I saw an advertisement that was placed for the first time. This house was at 1052 Kalamazoo Ave. I went to look it up and it seemed to be just the thing. I returned home and got Nellie to see it, and she said, “That’s good, I like it. Buy it.” We were resolute and put down $200 to bind the bargain. A few days later the property was signed over in my name.

In order that we might have more income to live on, I had paid off a $2,000 mortgage on the property at 705 Eastern Ave on which Nellie had to pay $60 a month. But the clearing of debt necessitated a shortage on the total amount when we bought the property at 1052 Kalamazoo Ave.

Before Nellie and I were married we agreed to make out a will, but she postponed it. When I spoke about a will again, she said, “Don’t you trust me?” I trusted her fully, but again it was not done and we got married. Later, months later we visited her son Jack. I said to him, “Don’t you think, Jack, we ought to make out a will?” “Surely,” he said, “I will talk to Ma.” He did, but she said, “It is none of your business.

There seemed not to be much intimacy or love between mother and children so that they knew each other’s affairs.

The day after I called up that Nellie had died, Jack and Henry Berenschot came in my home to search for a will. I did not know she made out a will. But she had made out a will, which left me out except only for the empty house and $1,000. The $800 in the bank and the $2,000 mortgage on 705 Eastern Ave, paid with my money and all the contents of the house at 1052 Kalamazoo Ave. and the property and business at 705 Eastern Ave., it was all to go to her children. When I engaged a lawyer he said I did not have a chance, but the upshot of it all was that the children could have whatever on which they had affection and was dear to them. They got all Nellie’s clothing and many other things and articles too many to mention. 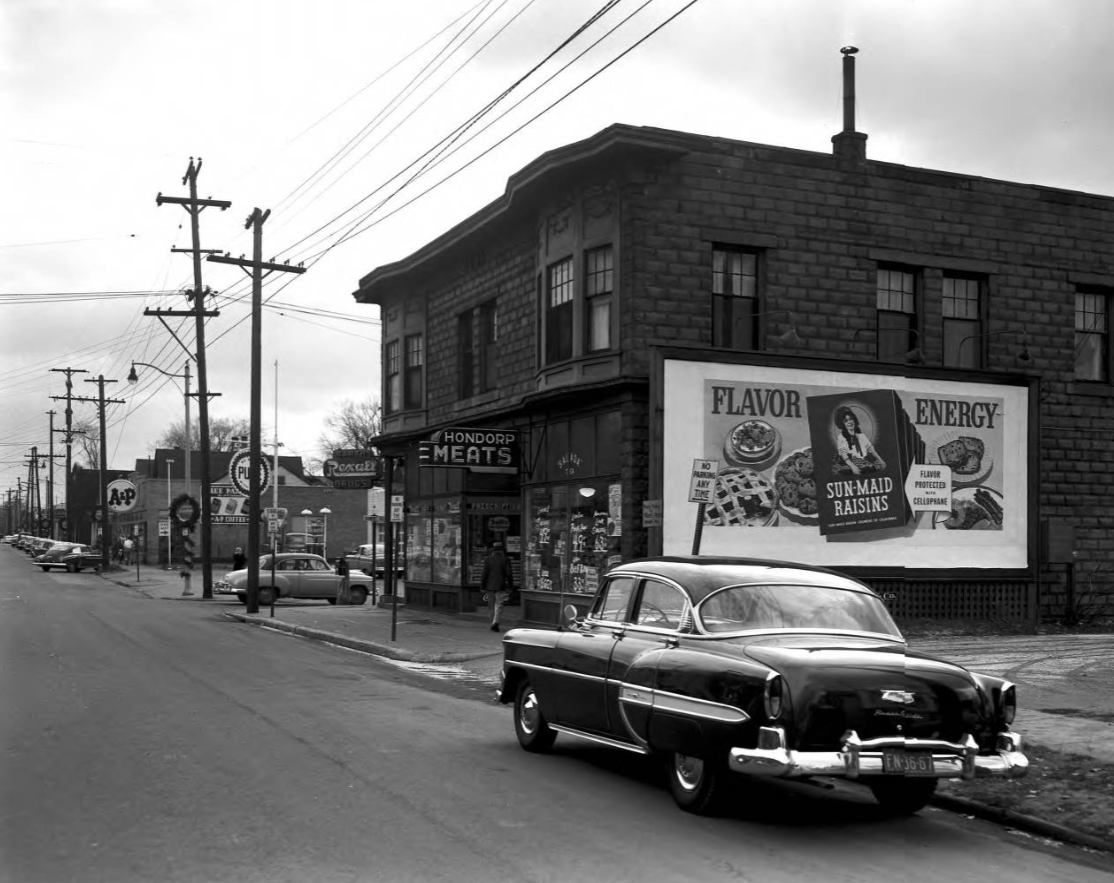 We retained the furniture, carpets and curtains up and downstairs, glassware and kitchen utensils, etc. To a few items we said no, not that. We were glad when everything was over.

For the space of about 15 months I showed my good will to them and visited them and their children when they had a birthday. It was not Nellie’s custom to remember birthdays, but when we were married we followed our special visits as during my first married life. They treated me apparently okay. However, they never visited me in my loneliness. During these many months I learned to rest my case with the Lord and I was thankful that I had a home of my own again, and I realized more than ever that I had made a mistake to sell my home at 612 Delaware St.

During our married life we visited some of Nellie’s friends; most of them were not unknown to me on account of my work for Pine Rest Hospital. Amongst them was Mr. & Mrs. Meindert Van der Wal of Jenison. Her name by a former marriage was Ten Elshof. Shortly after Nellie had died, Mrs. Van der Wal called me by telephone, she said because she knew a good lady as a housekeeper for me, but I told her that I was not looking for one. Time and again we would answer the phone, ladies inquiring if they could keep house for me. For more than a year I led a lonely existence. At that time I visited a number of the sick and shut-ins of our congregation. Besides, to while away my time, I did a lot of reading and went fishing alone or with others.

In the month of June 1952, Mrs. Van der Wal called me up again in regard of a housekeeper, but I told her I could not afford to have one, my income being too small. About a month later, she wrote me a letter and urged me to come and see them as they liked to talk some matters over with me. By that time I felt more keenly my loneliness and coming daily to an empty home and keeping house for myself was not without effect on the matter of getting married again. So, when I received her letter, I called her up and she urged me strongly to come over. When a day or two later I went there, Mrs. Van der Wal told me that Mr. Van der Wal had said to her that Kathryn Workman would make a good wife for Mr. Bakker, and she, his wife, had said, yes, I am going to talk to him. Then I told them frankly that my income was not sufficient to support two. Even without paying her a wage I would not care to have one. I said further, if ever a woman would keep house for me, they would have to be my wife and she should have enough of her own income to cover her keep. Mrs. Van der Wal said then, “I know she has a home of which she has some income and possibly also other means of revenue. Why don’t you get acquainted with her?” “Well,” I said, “I will think it over and pray about it.”

A few days later I called up this Kathryn Willems, whose maiden name was Tuinstra. She was keeping house for a blind lady, Mrs. Pauzenga in Grandville. Kathryn’s voice sounded pleasant over the phone. When I saw her, she also looked good to me. I told her housekeeping was out of the question and very frankly I laid before her the possibility of becoming my wife, if she had enough of an income to cover her upkeep so that together we would not enter upon a venture of poverty. She was interested, but she had to have a little time to think it over. She encouraged me to keep coming to see her, which suited me, for it seemed to me she would be agreeable to live with. From then on I was there a good deal of the time. I also made myself dear to the blind lady by reading to her, telling her the news of the day, or relating some interesting happening in my life. Therefore she urged me to come again, which I gladly agreed to do. Besides, as it was the canning season, I helped Kathryn to prepare for them and incidentally for ourselves, as part of the canning was on a 50-50 basis.

A few days after I got acquainted with Kathryn the daughter of Mrs. Pauzenga, Grace, got married, and it was obvious that she would quit her job at Steketee’s, where she was the head sales lady. She had intended to stay on until after the Christmas rush was over, but after they were married a month, her husband wanted her to quit then, and she stayed home. By that time we had decided to get married after we got our health certificates. The Rev. B. Essenburg, her pastor, performed the ceremony at the parsonage and the young married couple Charles Parm and Grace Pauzenga Parm consented to be our witnesses. It was September 5, 1952.

Two days later it was September 7, we attended a birthday party at Simon and Evelyn’s home so that they, the children could get acquainted with Kathryn my lady friend. It was my birthday. However, then we handed them all a marriage announcement that we were married. They were all surprised, although some of them had been suspicious a few days before. The few weeks preceding our marriage, we went here and there and also of course to 1052 Kalamazoo Ave. Kathryn was very much pleased with our little home and observed that everything was well kept and she said, “You don’t need a housekeeper,” and I said, “No, I prefer a wife.”

Looking back at the situation, we can plainly see God’s good hand over us. First of all, He caused me to come in possession of a home and furniture more than sufficient for our needs. Then he brought us individually into contact with the Van der Wals, who were moved to seek our good, and brought us in contact with one another. Furthermore, when Kathryn was thinking about finding another place to work when Grace Pauzinga and Charles Parm got married, He provided for her, for us, a suitable home so that she from the first would not have to go from one house to another to work and support herself.

After we had sent out the announcements we received several presents from the children and brothers and the nephews and nieces, families on Kathryn’s side. These presents we received when we attended the receptions given in our honor. It pleased us very much that Kathryn was so well met and received by all the children. From the very first, she as well as the children felt that she was one of us. In visiting her brother’s families and their children, Kathryn’s nephews and nieces and their families’ homes, we were glad to meet them and, as we judged, well received.

We observe at this time that our life is marked by TRIPLETS:

1. We lived on three continents
2. We were delayed three days when we were on the way to our home in the Cape Colony, because the railroad bed was washed out in that vicinity. Our home was in Middlebury, Transvaal.
3. We started housekeeping from the bottom up. Once in South Africa, once in the Netherlands, once in America – three times.
4. We buried three children in Grand Rapids
5. Married three times – once in Cape Town, South Africa, once in Grand Rapids, once in Jenison.

As we write this, the descendants of the Bakker family tree are (living) four sons and four daughters and her grandsons and ten granddaughters.