Today is a sad day at Men of the West, and yet we find peace and joy. Our beloved friend and brother, the Winged Hussar (Patrick), has gone on to his reward. In his last piece for us, posted in September, he announced his love for Jesus, in the midst of his physical sufferings. If you have not read it, you should do so now. If you have read it, then re-read it. 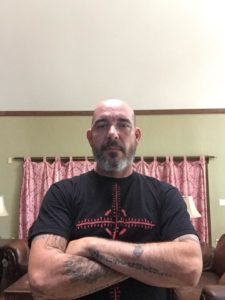 Patrick lived a rebellious and sinful life for many years. From a young age, he followed his own path, with no concern for the things of God. And yet God did not abandon him. God continued to pursue him. Finally, Patrick came to realize the truth, and it changed his life.

One of the greatest treasures that the Men of the West have found was getting to hear Patrick’s story. From excesses in sin to his ultimate redemption at the hands of a loving God, to hear him tell of his experiences was to almost physically touch the love that God gives to his children.

In his own words (from the September article):

In just a few days before I go under the surgeon’s knife in a third attempt to remove a malignant brain tumor, to be followed by a combination of radiation and chemotherapy. There is not much evidence that this course will provide much benefit in the long term. For the last 8 years, but especially the last couple of months since the disease has progressed to a more aggressive stage, I have spent no small amount of time on bruised knees, crying out to our Lord and Savior for Him to speak to me. Alas, I have heard not a word. It almost seems to me after the life I have led, I have received my just due, the penalty for years of living against God. I am tempted to believe that, with God’s silence weighed heavy on me as evidence of His eternal curse. I know that is not the case, however.

Many would be tempted to curse God when faced with such a scenario, but Patrick stood firm in his faith. He knew that what he had in God was greater than anything the world has to offer. Even as he suffered physically, he kept his eyes on Jesus.

Sadly, the medical treatments he discussed in that article did not work. We have known for a while that the end was coming for him in this  life, though we continued to pray for some respite and delay. He will be sorely missed by every one of us. Our lives are richer for knowing him, and we look forward to our reunion with him in days to come, in the presence of our Lord.

Patrick was, however, a fearless man. In fact, I am pretty sure his fear was reserved for God alone. During his treatments, diagnoses, etc., he continued to admonish men to be manly, and we could learn from that, as well. He wrote an article for us on that last year:

Everyone has fear, and everyone experiences doubt.There is no magic bullet that will cure fear, but YOU CAN change how you handle your fears. Fear can be paralyzing, but it can also be the strongest catalyst for change. The difference between a hero and a coward is which way you run when the shit hits the fan.  It’s the difference between being the weird little boy who was unpopular, sexually abused, picked on, and afraid of his own shadow, and the lion no one wants to poke when he’s sleeping.
When the fear of remaining as you are becomes greater than your fear of rejection, failure, or whatever it is that stands between you and where you need to be….you’re ready to begin the process of change. It takes a conscious effort to resign yourself to whatever may come, stride forward, take it on the chin,and push through till victory is yours. But in time, it becomes who you are, and fear becomes fuel.
So by all means, honor your wife, deal kindly with your children, provide for your family, and be charitable to your neighbor..but first and foremost, BE A MAN!

So for today, we will post no new articles. Today, we will mourn our beloved friend – not for his gain, but for our loss. If you are so inclined, we would appreciate prayers for Patrick’s soul and for his family and friends.

So my friends, in your darkest hour of need, when all seems lost, and you feel God has turned a blind eye and a deaf ear to your plight, take heart in knowing that in this time, you are indeed sharing in the sufferings of Christ. You have been counted worthy to do so. It’s in these times that your desire for God is proved true or not. When nothing but God’s presence will comfort you. This is how we know that we belong to Jesus. That there is purpose to our suffering, and that purpose is to glorify God. So the purpose is to learn to endure, persevere, and strengthen your faith. Now it’s time to get on your feet, take up your cross, and approach humbly before God’s throne of grace. There, lay down your life at the feet of our Lord, put your faith and trust in Christ and say, “Father,not my will, but yours be done.” This is saving faith, this is a sacrifice that is pleasing to God.
God willing, in the future perhaps I will have the opportunity to write another article, but if not, then my friends I leave you with these last words.
I am the Winged Hussar, and my name, is Patrick Czyzewski. Next year, in the “new Jerusalem”.

Trump Reins In The Ninth Circus

People of the West can't afford to be naive. Freedom is too hard to gain and