As we approach Month Two of the Trump Presidency, a couple of facts are starkly clear; our enemy is coming unhinged, and existing as the hopeless rabbits they are, the idea that they will have to do anything themselves is completely foreign to their feeble and impoverished imaginations.
From baseless recounts to faithless electors to paid street agitprop to Russian hacking to impeachment to military juntas to Deep State coups to impeachment (again), the rabbits have had one Hell of a magic carpet ride since the first week of November.
A few of these deep thinkers, apparently forced to thumb through their never-opened copies of the United States Constitutions for the very first time, have fortuitously stumbled upon another fantastical avenue for someone else to come along and save them: the 25th amendment.
The 25th amendment seeks to clarify temporary presidential succession, and allow for instances of presidential recusal for a host of reasons. Nestled within its four sections is a fact clear as the noon-day sun: the President in almost all circumstances selects when and how he is to be relieved of his duties, and for how long.
The one relevant section, Section 4, provides another avenue of Presidential ouster other than impeachment if a) the Vice President and “principal officers” of the President’s cabinet inform the Speaker and the Senate President in writing that the President is “unable to discharge the powers and duties” of his office, or b) the Vice President and any group designated by Congress, assumed by legal theorists to be a body of Congress itself, inform the Senate President and the Speaker of the same thing.
That seems to be where most of the rabbits stop reading, assuming victory is assured. However, the President has a chance to respond to assertions in writing; from there, Congress has 21 days to vote on the matter, requiring two-thirds approval of each chamber to uphold the unfit-for-office declaration.
In the case of President Trump, even if the Vice President and whatever necessary cohort of Congress somehow managed to collude and start the ball rolling on this process, what exactly would the criteria be for Congress to assess Trump’s inability to discharge the powers and duties of office? Making liberals cry and saying things the deadtree/cathode-ray-tube press refuse to accept is hardly sufficient. They would have an easier time establishing high crimes and misdemeanors. 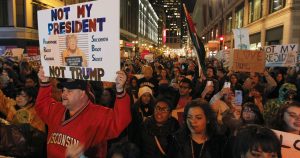 But let’s play along – say it all works out exactly as their opium dreams foretell. THEN YOU GET PRESIDENT MIKE PENCE, YOU INBRED NEO-HIPPIES.
Good luck.
On the down side, these lunatics won’t stop peddling every idle fantasy that occurs to them to anyone unfortunate enough to listen. On the bright side, this type of prolonged state of self-induced physiological stress will shred them from the inside-out.
Not tired of winning, yet.
The takeaway here is not that our enemies will try everything to wreak havoc; it’s that they won’t do any single thing themselves except plead for someone else to do the dirty work. For the moment, that is an acceptable state of affairs, but we can’t count on that to persist. But we’ll ponder the liberal fantasia version of Round 2 another time.
For now, keep pushing the cultural pendulum back to traditional Western values, and enjoy the next call to arms from the Left. If I were a betting man, and I am, I’m almost certain the next attempt will be either a coordinated effort to convince afflicted liberals to forgo paying federal taxes, or a stiff reading of the Royal Proclamation of 1775 attempting to establish the primacy of the British Crown upon the Colonies in rebellion as a surefire method to oust President Trump.
Laugh if you must, but it’s not nearly as implausible as you’d like to think.

Beast Life – What About Lent?

We Stand With Milo

Why They Hate Dugin