Because of all the politically correct idiots, we are being encouraged to stop saying “Merry Christmas” for the more palatable “Happy Holidays.” What the heck are “Seasons Greetings”? Can someone tell me what season we are greeting folks about? A Christmas tree? Oh, no! It’s now a holiday tree. Any Christmas song that even remotely mentions Christ or has a religious undertone is being axed for being overtly religious. And I’m sorry, forget X-M-A-S. Malcolm X? Yes. X replacing Christ? No.

Mr. Martin is perfectly correct in complaining that too many parents worry that their kids won’t enjoy the season unless provided with every electronic trinket advertised during Rudolph the Red-Nosed Reindeer. But he displays a very typical American historical ignorance when he complains about the politically-correct X-ing Christ out of Christmas.
A quick trip to the etymological dictionary might have set him straight:

Xmas – “Christmas,” 1551, X’temmas, wherein the X is an abbreviation for Christ in Christmas, from first letter of Gk. Christos “Christ” (see Christ). The earlier way to abbreviate it was Xp- or Xr-, corresponding to “Chr-,” and the form Xres mæsse for “Christmas” appears in the “Anglo-Saxon Chronicle” (c.1100). 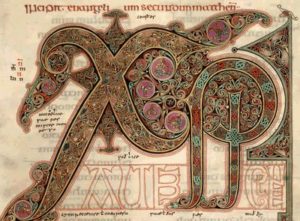 The abbreviation X for Christ is not the creation of the Politically Correct idiots of the modern world, but of the Christians of the early church. Symbolism within Christianity has a long history, a result of factors as varied as persecution by Imperial Rome and the cost of parchment, but the X, while we don’t know exactly when it began, has a simple origin: writers and artists represented the thing, in this case Christ, by simply using the first letter or letters of its name.
The first two letters of Christ’s name in Greek (the language of the New Testament) are chi (represented as an X) and rho (represented as a P), which were early combined in Christian art into the Chi Rho monogram, as in the picture above, which is taken from the Irish Book of Kells (ad 800). The Chi Rho is, in fact, the oldest monogram for Christ, certainly dating to Constantine in the 4th Century – it was the sign in which he was to conquer* – and quite possibly much earlier. And it is our creation, not that of “politically-correct idiots.”
The X in Xmas doesn’t represent the crossing of Christ out of Christmas any more than the X in those IXOYE** bumper stickers represents the crossing of Christ out of “fish.”
That’s not where the real war over Christmas is being fought anyway. In my humble opinion, Christ is in far more danger from Sony, Apple, and our own ignorance than he ever was from Michael Newdow.
* Whether one actually believes the story (I don’t) is irrelevant: there can be no doubt it’s older than Richard Dawkins, Sam Harris, and Amanda Marcotte. Even put together.
** in which the X also represents Christ – “Jesus Christ, Son of God, Savior.”

Sunshine and Storm in Rhodesia (Part 24)