The year 1919 was a pivotal year for Britain and the British Empire. The war had ended in November 1918, and a war-weary nation looked to a period of peace. However, the world had yet to settle down from four long years of turmoil. For the first time, the entire globe had been caught up in a European conflict. Colonies and dominions had fought alongside regular British troops, and next to (or across from) troops from the other European powers. As the troops began to return home, and the world situation began to settle down, no one really knew what the final product would look like. There was no doubt that the world would be different after the war, but how different? How severe would the changes be?
The very names ascribed to the war are indicative – “The War to End All Wars”; “The Great War”; “The War to Make the World Safe for Democracy.” War had existed from the earliest memories of mankind, but this one was so severe that many thought war had been done away with for good. Other wars had been important, and influenced world events, but this was “THE great” war. So the world’s outlook had shifted dramatically over the previous four years, and no one was sure what the world would look like, once everything settled down. 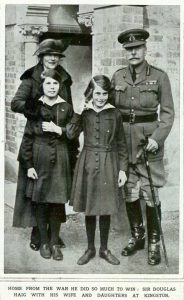 Factoring into this was the major shift in world governmental structures. Gone were the great European monarchies of Russia, Germany, and Austria. For centuries they had dictated policy across the continent, and in the relative blink of an eye, they ceased to exist – replaced by communist hardliners in Russia, and defeated governments in the others. While the war had not begun to bring democracy to the world, it did lead to the fall the traditional governments of these lands, which were all replaced with some form of republics (at least in name, if not in practice).
1919 was the year that the dust began to settle and the new world began to become clear. What soon became apparent was that colonies that had chafed under British rule for centuries and had bled next to British soldiers in the war, agitated for self-rule. No promise of future consideration or half-measures were acceptable to these nationalists. In Egypt, Balfour recognized by March of 1919 that the troubles were only beginning and the future of British civilization in the region seemed doubtful (James, p. 371). In India, the Middle East, and even in Central America, riots and anti-British demonstrations flared up (James, p. 372). Even British troops mutinied against delays in demobilization in the Spring. The war had ended, but unrest was rampant. In Afghanistan, a third war in the nation broke out, highlighting the fact that British rule was not in favor in “uncivilized” regions. Though British rule had seemed to rest on the consent of the natives in the past, the modern reality was that it only existed by force.
Compounding the colonial situation was the rise of the communists in Russia. The older governments (those that had not recently been swept away) tended to fear the events in Russia, hoping that their own nations would not be carried away in a communist plot. The publication of “The Protocols of the Elders of Zion” was carried out in the same year, and fed into the anti-communist frenzy (James, p. 374). “By January 1919 the British were supplying General Denikin’s forces in South Russia with arms for use against the Bolsheviks” (Blouet, p. 231). This is an important consideration. Much of the military force that could have been used in Ireland, Egypt, or India was focused on overthrowing the Communists in Russia. “The country as a whole was tired of interventions in foreign disputes. Elements to the left protested against policies which could be seen as anti-socialist and pro-Czarist” (Blouet, p. 235). For the first time in memory, it seemed that the British tradition of reasonable discourse and compromise would not be reliable.
Ireland exploded with anti-British fervor in 1919, as British authorities were distracted with the Versailles treaty (James, p. 376-77). Irish nationalists took the fight to England, engaging in terrorism on English soil, with the first groups forming in Liverpool in May 1919 (Hart, p. 72). This activity didn’t reach its “high point” until mid-1920, but began a year earlier, and came to involve over 1000 men. A suitable reaction from the British never did materialize, and eventually Ireland received independence – at least for the most part. But the beginning of this resistance was manifested in 1919. For the first time, the Irish had forced the conflict to exist on their own terms, rather than the British. Likewise, Egyptian leaders recoiled from further British rule, and violence broke out. Like Ireland, Egypt eventually regained her independence. They forced Britain to meet on their own terms, like equals. This all began in 1919 (James, p. 390). Experienced British troops finally began returning home, to be replaced by new recruits in 1919. These raw soldiers were sent to the Middle East and Egypt, where they were often ineffectual (James, p 396).
In India, Gandhi led his people in resistance to British rule. By mid-1919, things had gotten out of control and Gandhi’s peaceful resistance erupted in violence, especially at Amritsar. Financial concerns in India were an important part of the political situation. According to Balachandran, “during much of the interwar period, British policy makers looked to external sources of expansion to help mitigate the burden which their financial reconstruction agenda placed on domestic output and employment” (p. 576). This was done by attempting to “dampen India’s counter-cyclical influence upon an expanding world economy, and to foster this influence when the world economy was depressed,” especially in precious metals (Balachandran, p. 576). Eventually, Britain regained control of the situation, but the die was cast and eventually India came from under British control (James, p. 412). Gandhi, the spiritual and political leader, became the face of the Indian resistance that year, where he remained until his death.
1919 was the watershed year in which the world emerged from the shadow of the most horrific war ever fought. As peace came to the world, it was often short lived, especially in regions that were colonial possessions. Natives began to question foreign control, desiring independence and freedom. While these agitations had cropped up on a regular basis before, they all broke out simultaneously, within a few months of one another, in 1919. Britain had too many possessions and too few troops and resources to effectively squelch the uprisings. While they did tend to overcome the opposition in the short term, in the long term, it was too late and the Empire began to crumble. The events of 1919 serve as the foundation of that decline.
Works Cited:
Balachandran, G. “Britain’s Liquidity Crisis and India, 1919-1920.” The Economic History Review, New Series, Vol. 46, No. 3 (Aug., 1993), pp. 575-591.
Blouet, B.W. “Sir Halford Mackinder As British High Commissioner to South Russia, 1919-1920.” The Geographical Journal, Vol. 142, No. 2 (Jul., 1976), pp. 228-236.
Hart, Peter. “’Operations Abroad’: The IRA in Britain, 1919-23.” The English Historical Review, Vol. 115, No. 460 (Feb., 2000), pp. 71-102.
James, Lawrence. The Rise and Fall of the British Empire. New York: St. Martin’s Griffin, 1994.

Your Beast Life Now – The Benchpress