Finally, they released the memo. You probably have already read it. Some thoughts on what it contains.
First, what was in the memo: The FBI and the DOJ, used the Steele Dossier, which they knew was bogus, and paid for by the Clinton campaign to obtain a FISA warrant to spy on Carter Page and by extension the Trump campaign. The warrant was renewed three times and the court was never told of it dubious source, or that is was paid for by Clinton.
The FISA court is being abused. The same Republicans that complain about its abuse in this case just reauthorized the FISA courts system. How many ways has this secret court been abused?
The memo reveals bias in the FBI and the DOJ. The FBI is supposed to be neutral. They aren’t. The have both worked against Donald Trump and in favor of Hillary Clinton.
McCabe told Congress that they wouldn’t have sought the warrant without the Dossier. This tells us they had nothing else that was substantial.
Democrat politicians lied and said the memo should not be released because it contained material that would harm national security. Then they lied and said there is nothing in it. These lies should be remembered if and when the Democrat memo is released. 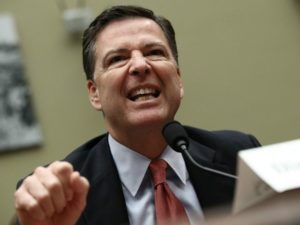 Some of the same people named in this memo also investigated Hillary Clinton. James Comey, cleared Hillary in her criminal email server dealings. Peter Strzok, changed the wording in Comey’s report from “grossly negligent” to extremely careless. Being grossly negligent with classified material is a crime. Strzok was later kicked off the Mueller investigation for bias against Trump. These people covered up crimes committed by Hillary Clinton.
Rosenstein signed one of the FISA warrant requests. The man who appointed the special prosecutor on the Russian investigation was in on this. Rosenstein continues to oversee the special prosecutor after Jeff Sessions recused himself.
What’s next? Well the Republicans say there’s more. If smart, they will release it piece by piece, to keep this in the headlines. The Democrats will continue to lie.
Will anyone go to jail? Too early to tell. Right now we know the the FBI and DOJ are biased against Trump and for the Democrats. If they have the ability to keep Hillary out of prison, then I doubt much will come of this. Here’s hoping I’m wrong.