Remember when the “Never Trumpers” swore that Trump, if elected, would betray his voters and put non-conservatives on The Supreme Court? To refresh your memory, here is a sample: 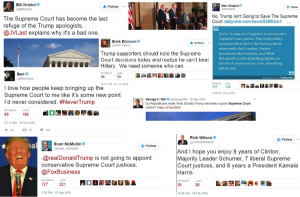 Since these folks have assured us that Trump would never nominate a real constitutionalist, let’s consider Judge Neil Gorsuch’s record:
He ruled against the Obama Administration in both the Hobby Lobby and Little Sisters of the Poor cases, where Obamacare was the focus. Sounds pretty good to me.
He wrote a book that argued against assisted suicide, and in that book gave indications that  he opposes abortion, as well (notably, he has not ruled in an abortion case before, so we have no direct reference there).
In Gorsuch’s own words: “judges should be in the business of declaring what the law is using the traditional tools of interpretation, rather than pronouncing the law as they might wish it to be in light of their own political views.”
Of course, the Democrats in the Senate are already rattling their sabers, giving indications that they are not thrilled with the choice, but they did not seem to have any problem with him when President George W. Bush nominated him for a seat on the 10th Circuit of the U.S. Court of Appeals. Then, he easily passed through the Senate with no opposition. It is the height of hypocrisy and partisanship that they make any waves now.
Some Democrats are signaling that they will not challenge Gorsuch, Here, at Men of the West, we are of the opinion that this is a calculated strategy, wherein they realize that they are simply swapping former Justice Antonin Scalia for another like him, so no real loss, from their perspective. Therefore, they do not want to force the Republicans to invoke “The Nuclear Option,” where the filibuster option is removed. Face it, in a few years, President Trump will most likely be nominating additional justices, and some of those will be to replace liberals on the bench, such as Ginsberg. So the Democrats are hoping to keep the filibuster in play for those cases. It is certainly something to keep in mind.
For the moment, though, let us enjoy the great nominee we have this time around. President Trump has done exactly what he promised he would do. For that, the Never Trumpers need to eat crow and admit that our new President is much more substantive than they believed.
So we are thankful for President Trump’s steely spine, and willingness to do what few presidents have done over the past three decades – tell the truth.