Civil discourse is a fading memory.
Any honest student of history can tell you two things:

Let me explain what I mean, and then point out where we are today. Too often, any current society thinks that they are the first to ever endure some particular thing. Poppycock. As the Preacher pointed out “there is nothing new under the sun.”  Aaron Burr shot and killed Alexander Hamilton; now that was some mean politics. You think 2016 was a nasty political campaign? Read about the 1800 presidential election sometime. Those supporting the incumbent President John Adams attacked Thomas Jefferson as an “un-Christian Deist,” predicting that if he won, there would be bloodshed in the streets of America. Jefferson’s supporters pointed to the growing centralized power under Adams, arguing that it would lead to the loss of individual rights.  So 200 years ago, we still had dire prophetic utterances, proclaiming gloom and doom, if “the other guy” won. Face it, nothing has changed in that regard.
What does change is what the opposing views hope to accomplish. This is the crux of the matter, as far as I am concerned. To quote Hamlet, “…there’s the rub.”
During some periods, we see these opposing sides fighting tooth and nail for what they believe to be the best course of action, but both sides want what is best for the country.  So we might see Martin Van Buren opposed by various Whig candidates in 1836, but most of those men truly had the country’s best interests in mind. They disagreed on what should be done, but not that their endeavors were meant to serve the people.
At other times however, we see periods where personal position, or ideological goals, are considered more important than the greater good. I would argue that we have been in this mode for the past century or more. Woodrow Wilson was hell bent on his globalist dream, wherein a Messianic America would spread his views across the globe. Franklin Roosevelt used the pretense of helping the common man suffering through the Great Depression to ram through his fascist/socialist programs. Do we even need to talk of more modern debacles under Johnson, Clinton, or Obama? And do not think that it was only the Democrats of the past century that did this. We have the twin Bush travesties, where we got a New World Order and the Patriot Act. Sure, some of these folks were worse than others, but none were truly focused on doing what was best for America. 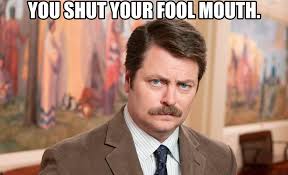 And here is where civil discourse comes into play. Most Americans consider themselves good, decent people. They want to be polite. It is the American tradition to do your own thing, and let others do theirs. As long as you stay off my lawn, I will stay off of yours. We do not have to like our neighbors, but we do expect that we will all treat each other with respect and maintain cordial relations. But while we try live our lives, we are being “niced” to death.
While we try to “establish a dialogue” with the other side, or “build a consensus,” the elites in power are stripping us of our rights, destroying what remains of America, and leading us into a death spiral. Yes, I know that such prognostications have always been made. Yes, Adam’s folks warned about blood in the streets in 1800. In 2012, we heard warnings that America could not survive another 4 years of Obama. And yet, here we are still. But if we look at long term trends, by considering historical realities, countries and nations rise and fall. And there is the difference between 1800 and today. In 1800, Adams and Jefferson both loved America. They disagreed on many things, but not on their need to serve the country. Today, we no longer have that luxury.
The Democrats are nothing more than a political group, cobbled together from various identity groups and those who claim to be victims of some ethereal prejudice. As a whole, they have no unified goal. The homosexuals only concern themselves with policies that affect their particular issues: gay marriage, gays in the military, more AIDS research, etc. Minority groups care nothing about America. They care only about what helps their own group: take money from those who work hard and earn it, and give those funds to the lazy malcontents who know nothing besides welfare and protesting. There is a Democratic remnant, who currently cling to some semblance of power, that do have an agenda, but it is not one that intends to help America. It is nothing more than a modern variation of Wilson’s Globalism. There is not one thing about the Democrats that focuses on what is best for America. NOT. ONE. THING.
The Republicans are no better, for the most part. For the past 7 years, we heard Republicans argue that Obamacare must be repealed, yet when they finally get the chance, what do they do? They give us something just as bad or worse. Only a small group within the Republican Party kept us from this abomination. Most Republicans have the same Globalist perspective as the Democrats, calling for a continuing warfare state, intent on spreading Americanism through the world. At least with Democrats, we know that they are anti-American. They basically proclaim it. The Republicans still try to wave the flag and act like they have America’s interests in view, but the reality is different. They are no different than the Democrats, just a little less honest about it. Admittedly, there are a few Republicans that do maintain a true “America First” mentality, but they are very few and far between.
So I am saying that we need to stop with the “let’s all get along” mindset. It is time to make things happen. To be clear, I am not calling for people to take up arms and storm Washington. I am talking about a mindset that Americans need to have. I do not care if Democrats agree with me. I do not care if Republicans agree with me. I just want those of us who want America to be America to agree with me.
If that means that someone gets offended by my words or actions? Tough. I do not care. If that means that some illegal alien  has to go home? Good. You do not belong here anyway. If that means that some politicians get run out of town on a rail, then fantastic. It is about time.
Hear this loud and clear: I am not looking for civil discourse with homosexual apologists, abortionists, communists, liberals, neocons, or any other group that does not put the good of America first. I give not one tiny modicum of a damn what you think or want. I  have no desire for a dialogue, meeting of the minds, or any other rapprochement with you. You are the enemy of all that is good and decent. I want you to leave and never come back. How is that for civil?
Recently, Fox News personality Bill O’Reilly made a comment about Democratic Congresswoman Maxine Waters’ hair, comparing it to James Brown’s wig. The wailing and gnashing of teeth from the left over the remark is hilarious. You would almost think none of them had ever commented on Donald Trump’s hair, or said he looked like he had rolled around in “cheeto dust.” For the left, it is okay to ridicule the right, but not to make fun of the left. Just shut up, all of you. We can make fun of who we want. Maxine should be glad that is all that got attention. God forbid anyone point out that she is freaking crazy.  She has no business in Congress at all, not because of her hair, as ridiculous as it is, but because she is stupid. It is not a shock to learn that she worked as a head start teacher and has a degree in Sociology.  Figures.
No longer do we hope for a bunch of hand-holding and kumbaya love-fests. What we hope for now is a strong stand and victory. And, by God’s grace, we will have it.