A reader requested that we respond to this article on LewRockwell.com. The author asks some uncomfortable questions about the Non-Aggression Principle (NAP).

First, does the NAP require certain “cultural soil”? Could the answer be any more obvious? Where on earth does a libertarian society exist? Nowhere. The US has proponents of libertarian principles, but we are less free than we used to be. The NAP is dead on arrival in Saudi Arabia, or in Red China. It is self evident that the NAP won’t work everywhere. It doesn’t work anywhere at the moment.

It obviously is. Our ideas of liberty come from France and England.

Then you cannot do anything about it, without violating your own NAP.

Only if they want their children to enjoy the same culture that they do. If you’re OK with your daughters wearing burkas or being forced to have abortions, then no, you don’t need to protect our culture.

Then libertarians have to make a decision. What is more important to them, their principles or their children? At Men of the West, we’ve considered this already, and the answer is Alt Right or Die.

Of course. Most libertarians would say no, but they don’t live in the real world.

Of course. But not without violating the NAP. We, at the Men of the West, say “You have to go home now”.
I’ve spent a little time trolling a Libertarian Party Facebook group. This is something that they cannot grok. In the particular group I’m in, a large portion of the group are left libertarians. They don’t care so much about liberty, except as it pertains to homosexual acts, abortion, and smoking weed. Another large portion of the group are those that are wedded to the principles, and lack the ability to see anything that isn’t compatible with them. The answer for them is always the NAP.  They are completely unable to see that while it may to take two to tango, it only takes one side to make war. Not everyone cares about your personal liberty, and losing a culture war is no less devastating than losing armed conflict. 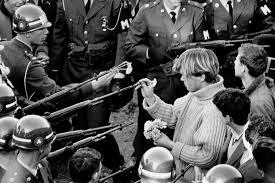 The NAP is basically an agreement between parties. If you don’t mess with me, I won’t mess with you. This works in theory, if the parties all subscribe to that principle. Most libertarians also support individual gun ownership, as they should. Eventually, a person can defend themselves with violence, should it become necessary, when their life or property be in danger. The weakness is they can only play defense. The other side gets to make the first move and they also get to set up the chessboard. Preemptive moves are aggression, and that violates the NAP.
Libertarian principles usually support open borders. They think that people should be allowed to move freely. This is where the fantasy breaks down. They simply cannot see that an influx of large numbers of people that have no conception of libertarian ideals is a threat. Perhaps they think those people just want to be free and that they share the libertarian ideas. The truth is most just want a job. That is the best case. Some obviously want to coopt Western Culture and replace it with Islamic theocracy. They either don’t care about libertarian ideas or are outright hostile to them. There’s nothing that says the whole nation cannot become like parts of Dearborn Michigan over time.
Combine the blindness against the threat with the principled inability to act if they finally do recognize it, you’ve got a recipe for extinction. Libertarians are willing to watch Muslim or Mexican hordes march across the border, and then give them voting rights. It’s an ideological blind spot so large you can’t see across it.
It should be easy to see that libertarian principles, as currently formulated, contain the seeds of their own destruction. Add in the fact that many libertarians are pro-abortion, and the hordes will out-breed them even if they keep them at bay for awhile.
Taking these ideas out of the theoretical and into the real world, you can see there is an existential threat to our culture in the US. The same thing that threatens the pie in the sky libertarian fantasy world is a threat to our constitutional republic as well. We already have a small muslim population that is not compatible with the West all. Giving them rights under the constitution was a big mistake. Our elites are still letting in large numbers of third world people who don’t give a hoot about limited constitutional government. The Democrat party wants to give these people voting rights. If they do, our country will soon no longer be what it is now. This leads to a question of my own.
Knowing that our elites are trying to destroy our culture, what are we going to do about it?
UPDATE: The author responds in the comments:

Mr. Glass
Thank you for the extensive comments on this post; I will second the comments of Brian on March 29, 2017 at 6:26 am.
The fact that a self-described “libertarian” can ask the questions that I asked should suggest that there are libertarians who realize that it takes much more than the NAP to develop and maintain a peaceful society.
I have written dozens of posts on libertarianism, culture, immigration. I have dealt with all of these on the basis of the non-aggression principle, and have poked holes in each left-libertarian position. Such as these are “left,” and ignore the “libertarian” whenever it gets in the way of “left.”
http://bionicmosquito.blogspot.com/p/normal-0-false-false-false-en-us-x-none.html
I do not claim to be alt-right, yet I suggest there is much in common between Rothbardian / Misesian libertarians and the alt-right. a regular read of LRC should be evidence enough of this.
Kind regards

Bionic Mosquito.
My article was rather flippant in replying to yours, and for that I apologize. It was apparent from the tone of your article that you knew that the NAP was inadequate. I had other libertarians that I interact with on my mind when I wrote it, and you didn’t deserve harsh criticism.

Augustus, Herod, and the Innocents

The Time for Civil Discourse is Over