If you didn’t watch President Trump’s speech last night, I encourage you to go watch the whole thing. I’m not going to focus on the political content of the speech, as there’s plenty of that elsewhere. Let’s discuss the impact of the speech instead. Trump was very well prepared tonight; he spoke with confidence and aplomb. Unlike his predecessor, Trump rarely uses the word “I” in his speeches. He stays focused on the issues he’s addressing rather than himself; it’s a refreshing change. This was, arguably, his best speech ever. He held back on the sarcasm and turned up the intensity. 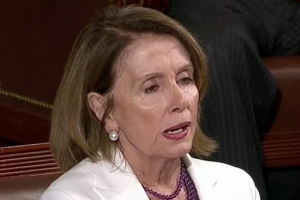 The Democrats were predictably petulant and partisan. They didn’t greet him when he entered. Most of them refused to applaud when Trump said we should put America and Americans first. When Trump discussed the victim of immigrant crimes, they actually groaned. These people hate America. One of the few things that Trump said that was able to get them to stir from their seats was the announcement of a paid Family Leave plan which just goes to prove that government mandates that will impose heavy costs on businesses really get their blood pumping. Amusingly, one group of Democrats that did not clap at this were those that came dressed in white to show unity in opposing any attempts by this administration to roll back women’s rights. The Family Leave plan should have had them dancing in the aisles, but no, they don’t care about substance. To sum up the Democratic mood last night, here’s a picture of Nancy Pelosi during the speech. Clearly, the bitter harpy didn’t want to be there.
Let’s talk about what this speech means for the GOP. Near the beginning of the speech, some of the Republicans were reluctant to stand and applaud when many of the others were. But it didn’t take long for them to catch on. By the end of the speech, whether they were sincere or not, they were all on their feet applauding loudly and frequently, even that traitorous bastard, John McCain. I’m of the opinion that many of the cucks in Congress that have refused to support Trump were brought to heel last night. Now, whether they like it or not, they’re going to have to swallow that bitter pill and align themselves with their President. Mid-term elections will come quicker than anyone can imagine, and the people are paying attention. If they want GOP support for their re-election campaigns, they’re going to have to suck it up. For many in the GOP, it’s simply going to be about survival. It will be interesting to observe over the next few months how the Congress cucksters start embracing Trump and speaking out in support of him, however insincere it might be. 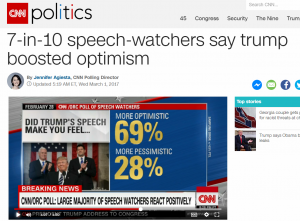 The media had a hard time denying this was a great day for Trump. CNN reported that in their polling immediately after the speech, 69% reported that they felt more optimistic. Yes! CNN is actually reporting that. I encourage you to read the entire article (archived) here. Elsewhere, partisan hack and racist, Van Jones, declared that Trump became the President the moment he honored fallen Navy Seal, Ryan Owens and directed the nation’s attention to his widow who received extended applause, which some Democrats withheld. That’s a huge admission coming from someone like him. The rest of CNN’s site was tepid but not oppositional; a softened stance that has been earning them a great deal of scorn lately. Even caustic HuffPo and Buzzfeed found it difficult to be overly negative about this speech.
In summary, not only did Trump make himself look very good tonight, he allowed the Democrats an opportunity to save face and they turned him down flat and they’re going to pay a very steep price in public perception.

Vote With Your Money