As the Victorian Age drew to a close and the Edwardian period began, the British Empire found that ties to colonial dominions were weaker than they had been (James, p. 319). The Boer War had ended, but rather than eliciting patriotic fervor, it had been tiresome and had only succeeding in presenting the African inhabitants as barbarous. Mismanagement and political turmoil were the standard ethos of the period. Many believed that the era of British Imperial dominance was coming to an end, just as Rome had been destroyed by a diminishing morality (James, p. 320). Besides internal decay, external forces were also aligning against British supremacy.
Germany, Russia, and the United States were all advancing quickly, overtaking Britain’s dominating position in military and economic power (James, p. 320). These internal and external concerns led to a reinventing of what it meant to be British. It was hoped that a revitalization of economic concerns and resurgence of national self-confidence would lead to Britain regaining its earlier momentum as a world power (James, p. 320). While liberal “individualism” had served as a major tenant of British growth in the 18th and 19th centuries, it quickly became viewed as outdated. 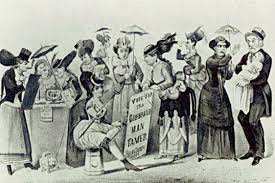 Free Trade Is Not a Virtue