In October of 1991, a freak snowstorm rolled across the American Midwest. Originating in the Colorado high plains, it streaked down I-70 across Kansas and then northern Missouri, finally petering out east of St. Louis. In a single night it dumped a foot of snow on trees still green with leaves, ripping down power lines and plugging storm drains with debris.  The week of bitter cold that followed froze water lines in homes that were without heat. Some areas of suburban Kansas City were dark for two weeks or longer. At the time, my young family lived in one of them.

As I gazed upon the snow the morning after the storm passed, my first thought was that I had been transported into a world without color or edge.  My car was a mere bump in the driveway, pinned down by tree branches that had been ripped from the mature oaks that decorated my neighborhood, then covered in white powder. Glancing about, I noted that the driveway and street were in the same condition. A couple neighbors were trying to push one car out of the ditch. The futility of that gesture was obvious. No one was going anywhere until the cleanup crews arrived. I could do nothing until someone came to help.

The second thing I noticed was that the house was cold and dark. I soon discovered the reason: a tree branch lay across the line to my house, pulling it taut toward the ground; my meter had been ripped from the house and hung in the air six feet away.  We had no power, no hot water, no furnace, and the temperature was dropping.

As I poured cold milk on cold Cheerios, I wondered how long the food in the fridge would last without power.  Probably quite a while, I decided, as the whole house was becoming a refrigerator. I scoured the house for candles, batteries, and matches.  We would all be going to sleep together that night, and the next, and the next, as soon as it got dark. Such camping can be fun. For about two days. I shook my head at my own foolishness.  As an Eagle Scout, I had promised many times that I would always Be Prepared.  Yet here I was, the helpless provider and protector of a woman and three young kids for whom I could not even provide a bowl of hot oatmeal. I could shovel the driveway, but the driveway led nowhere.

Being without power was no mere inconvenience, either. One of my sons needed breathing treatments for his asthma. Once the streets were cleared, my wife drove him to her parents’ house, every 4 hours around the clock, because there we could plug his nebulizer machine in.

Two weeks in suburban America without amenities seems like a year, and as a father who took his protect-and-provide responsibilities seriously, it almost unmanned me. I promised myself that I would never allow that to happen again.

When we moved shortly thereafter, it was to a different kind of area.  Instead of another picket-fenced home in the suburbs, we bought acreage outside of a small town.  Instead of an electric furnace, we had a propane furnace and a wood-burning fireplace insert.  Instead of being on city water, we were on a 100-year-old hand dug well. We dug a garden, bought some chickens, planted an orchard. We bought a generator and had the box re-wired so we could run the kitchen on gasoline power if necessary. We installed a second propane tank and kept it filled. Today, I like to think that I am prepared, though after two decades I am amazed that I still discover things I had not thought of. 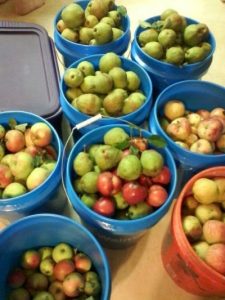 Still, one doesn’t need to be prepared for everything to make a difference. Ten years after that storm, a company that I was working for went bankrupt and cut us all loose with not so much as a fare-thee-well. My kids still ate three meals a day while I looked for work. I could provide even when I couldn’t earn. That pantry was a welcome oasis in a desert of trouble.

Preppers prep for lots of reasons.  Some are concerned with economic collapse or dictatorship, others with an electromagnetic pulse that takes out our aging electrical infrastructure. Still others are terrified that reptilians are going to set off the caldera at Yellowstone and cover the entire nation in hot ash. Others can’t wait for the balloon to go up so they can start marauding. It’s easy to laugh at the people on prepper TV shows or at the guys on Youtube who make homemade armor.   There are fools among preppers, and there are wise men, just as you will find in any group of people. The fools are the ones you see.

I am certain that we – the entire West – cannot continue to run perpetual fiscal deficits without destroying our own currencies. The results of that, here someday as in Venezuela today, can be ameliorated by preparing for them.  I entertain the possibility that as America divides culturally, it may also divide geographically, and such a situation is not conducive to efficient markets. Technology spreads, and one day a nuke may explode over one of our cities or a bio-weapon might be released in it. The earth’s magnetic field is decaying as it does periodically, which could have bad effects on our electronically-connected world. But I don’t prep for those reasons.

I prep because the snow falls on the green leaves sometimes. Good jobs disappear unexpectedly. Trains spill chemicals in the river that your city draws its water from. I prep because the unexpected happens, life changes, and fragility is a bad thing.  I prep because I am a father, a buffer between helpless young people and a hard, unpredictable world.

I prep because no matter what happens in the world, there are ways to make it easier on the ones I love. And I keep prepping because I re-learned that lesson the hard way.

Physical conditioning: Walking with a ruck