Editor’s Note: G. K. Chesterton is one of the towering figures of the late 18th and early 19th Centuries. He was a novelist, theologian, and political thinker. Even his enemies referred to him as a “Colossal Genius.” Here, we present his work that explains why he believed, and know that you will benefit from his insights. Since Chesterton was responding to Robert Blatchford’s works and teachings, we provide a link to his opponents Infogalactic article. For those who choose not to read that link, Blatchford was a prominent atheist and social reformer. 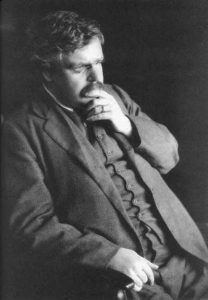 I mean no disrespect to Mr. Blatchford in saying that our difficulty very largely lies in the fact that he, like masses of clever people nowadays, does not understand what theology is. To make mistakes in a science is one thing, to mistake its nature another. And as I read God and My Neighbour, the conviction gradually dawns on me that he thinks theology is the study of whether a lot of tales about God told in the Bible are historically demonstrable. This is as if he were trying to prove to a man that Socialism was sound Political Economy, and began to realise half-way through that the man thought that Political Economy meant the study of whether politicians were economical.
It is very hard to explain briefly the nature of a whole living study; it would be just as hard to explain politics or ethics. For the more a thing is huge and obvious and stares one in the face, the harder it is to define. Anybody can define conchology. Nobody can define morals.
Nevertheless it falls to us to make some attempt to explain this religious philosophy which was, and will be again, the study of the highest intellects and the foundation of the strongest nations, but which our little civilisation has for a while forgotten, just as it has forgotten how to dance and how to dress itself decently. I will try and – explain why I think a religious philosophy necessary and why I think Christianity the best religious philosophy. But before I do so I want you to bear in mind two historical facts. I do not ask you to draw my deduction from them or any deduction from them. I ask you to remember them as mere facts throughout the discussion.

The Moslem has a pure and logical conception of God, the one Monistic Allah. But he remains a barbarian in Europe, and the grass will not grow where he sets his foot. The Christian has a Triune God, “a tangled trinity,” which seems a mere capricious contradiction in terms. But in action he bestrides the earth, and even the cleverest Eastern can only fight him by imitating him first. The East has logic and lives on rice. Christendom has mysteries-and motor cars. Never mind, as I say, about the inference, let us register the fact.
Now with these two things in mind let me try and explain what Christian theology is.
Complete Agnosticism is the obvious attitude for man. We are all Agnostics until we discover that Agnosticism will not work. Then we adopt some philosophy, Mr. Blatchford’s or mine or some others, for of course Mr. Blatchford is no more an Agnostic than I am. The Agnostic would say that he did not know whether man was responsible for his sins. Mr. Blatchford says that he knows that man is not.
Here we have the seed of the whole huge tree of dogma. Why does Mr. Blatchford go beyond Agnosticism and assert that there is certainly no free will? Because he cannot run his scheme of morals without asserting that there is no free will. He wishes no man to be blamed for sin. Therefore he has to make his disciples quite certain that God did not make them free and therefore blamable. No wild Christian doubt must flit through the mind of the Determinist. No demon must whisper to him in some hour of anger that perhaps the company promoter was responsible for swindling him into the workhouse. No sudden scepticism must suggest to him that perhaps the schoolmaster was blamable for flogging a little boy to death. The Determinist faith must be held firmly, or else certainly the weakness of human nature will lead men to be angered when they are slandered and kick back when they are kicked. In short, free will seems at first sight to belong to the Unknowable. Yet Mr. Blatchford cannot preach what seems to him common charity without asserting one dogma about it. And I cannot preach what seems to me common honesty without asserting another.
Here is the failure of Agnosticism. That our every-day view of the things we do (in the common sense) know, actually depends upon our view of the things we do not (in the common sense) know. It is all very well to tell a man, as the Agnostics do, to “cultivate his garden.” But suppose a man ignores everything outside his garden, and among them ignores the sun and the rain?
This is the real fact. You cannot live without dogmas about these things. You cannot act for twenty-four hours without deciding either to hold people responsible or not to hold them responsible. Theology is a product far more practical than chemistry.
Some Determinists fancy that Christianity invented a dogma like free will for fun -a mere contradiction. This is absurd. You have the contradiction whatever you are. Determinists tell me, with a degree of truth, that Determinism makes no difference to daily life. That means – that although the Determinist knows men have no free will, yet he goes on treating them as if they had.
The difference then is very simple. The Christian puts the contradiction into his philosophy. The Determinist puts it into his daily habits. The Christian states as an avowed mystery what the Determinist calls nonsense. The Determinist has the same nonsense for breakfast, dinner, tea, and supper every day of his life. 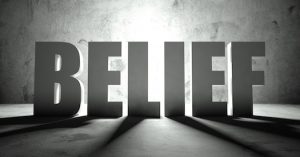 The Christian, I repeat, puts the mystery into his philosophy. That mystery by its darkness enlightens all things. Once grant him that, and life is life, and bread is bread, and cheese is cheese: he can laugh and fight. The Determinist makes the matter of the will logical and lucid: and in the light of that lucidity all things are darkened, words have no meaning, actions no aim. He has made his philosophy a syllogism and himself a gibbering lunatic.
It is not a question between mysticism and rationality. It is a question between mysticism and madness. For mysticism, and mysticism alone, has kept men sane from the beginning of the world. All the straight roads of logic lead to some Bedlam, to Anarchism or to passive obedience, to treating the universe as a clockwork of matter or else as a delusion of mind. It is only the Mystic, the man who accepts the contradictions, who can laugh and walk easily through the world.
Are you surprised that the same civilisation which believed in the Trinity discovered steam? All the great Christian doctrines are of this kind. Look at them carefully and fairly for yourselves. I have only space for two examples. The first is the Christian idea of God. Just as we have all been Agnostics so we have all been Pantheists. In the godhood of youth it seems so easy to say, “Why cannot a man see God in a bird flying and be content?” But then comes a time when we go on and say, “If God is in the birds, let us be not only as beautiful as the birds; let us be as cruel as the birds; let us live the mad, red life of nature.” And something that is wholesome in us resists and says, “My friend, you are going mad.”
Then comes the other side and we say: “The birds are hateful, the flowers are shameful. I will give no praise to so base an universe.” And the wholesome thing in us says: “My friend, you are going mad.”
Then comes a fantastic thing and says to us: “You are right to enjoy the birds, but wicked to copy them. There is a good thing behind all these things, yet all these things are lower than you. The Universe is right: but the World is wicked. The thing behind all is not cruel, like a bird: but good, like a man.” And the wholesome thing in us says. “I have found the high road.”
Now when Christianity came, the ancient world had just reached this dilemma. It heard the Voice of Nature-Worship crying, “All natural things are good. War is as healthy as the flowers. Lust is as clean as the stars.” And it heard also the cry of the hopeless Stoics and Idealists: “The flowers are at war: the stars are unclean: nothing but man’s conscience is right and that is utterly defeated.”
Both views were consistent, philosophical and exalted: their only disadvantage was that the first leads logically to murder and the second to suicide. After an agony of thought the world saw the sane path between the two. It was the Christian God. He made Nature but He was Man.
Lastly, there is a word to be said about the Fall. It can only be a word, and it is this. Without the doctrine of the Fall all idea of progress is unmeaning. Mr. Blatchford says that there was not a Fall but a gradual rise. But the very word “rise” implies that you know toward what you are rising. Unless there is a standard you cannot tell whether you are rising or falling. But the main point is that the Fall like every other large path of Christianity is embodied in the common language talked on the top of an omnibus. Anybody might say, “Very few men are really Manly.” Nobody would say, “Very few whales are really whaley.”
If you wanted to dissuade a man from drinking his tenth whisky you would slap him on the back and say, “Be a man.” No one who wished to dissuade a crocodile from eating his tenth explorer would slap it on the back and say, “Be a crocodile.” For we have no notion of a perfect crocodile; no allegory of a whale expelled from his whaley Eden. If a whale came up to us and said: “I am a new kind of whale; I have abandoned whalebone,” we should not trouble. But if a man came up to us (as many will soon come up to us) to say, “I am a new kind of man. I am the super-man. I have abandoned mercy and justice”; we should answer, “Doubtless you are new, but you are not nearer to the perfect man, for he has been already in the mind of God. We have fallen with Adam and we shall rise with Christ; but we would rather fall with Satan than rise with you.”