“So Joshua defeated Amalek and his people with the edge of the sword. Then the LORD said to Moses, “Write this for a memorial in the book and recount it in the hearing of Joshua, that I will utterly blot out the remembrance of Amalek from under heaven.” And Moses built an altar and called its name, The-LORD-Is-My-Banner; for he said, “Because the LORD has sworn: the LORD will have war with Amalek from generation to generation” (cf. Exodus 17).

Later in Deuteronomy we are adjured to:

“Remember what Amalek did to you on the way as you were coming out of Egypt, how he met you on the way and attacked your rear ranks, all the stragglers at your rear, when you were tired and weary; and he did not fear God. Therefore it shall be, when the LORD your God has given you rest from your enemies all around, in the land which the LORD your God is giving you to possess as an inheritance, that you will blot out the remembrance of Amalek from under heaven. You shall not forget” (Deuteronomy 25). 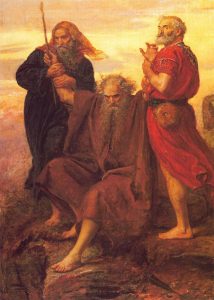 So, the Scriptures remind us that this is ultimately not a ground war, but a heavenly one. There is no doubt that Joshua waged physical war with a sword in his hand against a physical enemy committed to wiping out Israel, but let us not forget and let us remember that this war is ultimately fought and won in the heavenly realms: as long as Moses’ hands were held aloft, Israel prevailed.
The moral future of mankind is threatened not so much by Amalek himself, but by glorifying the memory of Amalek. Glorifying those and the memory of those who have committed themselves to destroying the happiness of mankind by whatever means possible will awaken the desire of future generations to emulate them. This is clearly and unequivocally the objective of the Left who, I would suggest, are animated by the spirit of Amalek.
They prey on the weak and the stragglers and, like Amalek, have no fear of God. Like Amalek, their ambitions will not be realized and they will not be satisfied until they have destroyed the well being of the nations. They simply cannot brook the thought that somewhere there is a happy home which refuses to bow before the might of their nefarious agenda.
Those who dare trust in moral and spiritual powers are anathema to Amalek and must be summarily destroyed. Amalek’s greatness lay in his power of destruction. Therefore Moses builds an altar for remembrance, which serves as an antithesis to the sword of Amalek, indicating that someday in the future the entire earth will be transformed into an altar to God.
It is with this altar that the war against Amalek has begun. Moses calls the altar ‘Adonai Nisi’, ‘the Lord is my banner‘ or ‘the Lord is my miracle,’ precisely because God is calling us to battle and He is showing us exactly where we are to fight. And it is not the sword of Israel which eventually prevails over Amalek, but Moses’ staff raised aloft to the real power behind Joshua’s sword which ultimately secures the victory for God’s people.
Keep in mind that a banner is not a weapon, but is employed to show the soldiers the direction and location of the battle. It is also critical to understand that this was an enterprise launched by God through Moses. The purpose then is to fight and overcome everything that is un-Godly on earth. Everything for which Amalek stands.
Our objective is not militant in nature, but primarily a defensive struggle where Amalek is ultimately defeated. Ultimately, this is a war for the complete recognition of God’s Name on earth, and therefore God’s direction of history will inevitably mean war against Amalek, and all those animated by his spirit, until the end of the age.
I  sincerely believe that Amalek, and its imitators on the Left, will ultimately be defeated, not by a sword stronger than their own, but by a force augmented by God’s power, a force rooted in tenacious adherence to the truth and unflappable faithfulness to God and His Word. Sans provocation, we will continue to be attacked by the Left, simply because they sense a threat latent in us which contradicts their power. But not to fret – we have already been assured of victory; we only need to stand fast, with our eyes fixed on the Author and perfecter of our faith.  No weapon formed against us shall prosper.
The Left worships and is committed to destruction, plain and simple, whereas we are committed to building, uplifting, and ennobling everything we possibly can in the time we have been allotted. May we never envy or glorify these destroyers of everything, men who are always promising you freedom while they themselves are slaves of corruption; if by such men a person is overcome, by such men he will also be brought into bondage. They feast with you without fear, serving only themselves. They are clouds without water, carried about by the winds; late autumn trees without fruit, twice dead, pulled up by the roots; they behave as raging waves of the sea, foaming up their own shame; wandering stars for whom is reserved the blackness of darkness forever (cf. Jude 1).
We, on the other hand, are being called to battle and we have been shown where we are to fight as well our objective: to fight and overcome all that is un-Godly and stands in opposition to what is true, noble, right and praiseworthy. We didn’t pick this fight, but God has called His people to finish it, and finish it we must; and with God seated firmly upon His throne and by His Providence, we most certainly will. This is no time to shrink back nor shirk our duty:

So do not throw away your confidence; it will be richly rewarded. You need to persevere so that when you have done the will of God, you will receive what he has promised. For, “In just a little while, He who is coming will come and will not delay.”  And, “But my righteous one will live by faith. And I take no pleasure in the one who shrinks back.” But we do not belong to those who shrink back and are destroyed, but to those who have faith and are saved. (cf. Hebrews 10)

Remember to blot out their memory . . . do not forget.