Editor’s Note:   a laundry basket of fruit and candies and other ordinary items appeared at my door with a handmade booklet resting on top of it.  The Booklet was addressed to my children.  This is what it said. 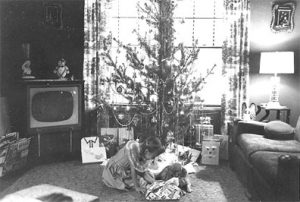 I didn’t get the new Sunday shoes but daddy lined the insides of my old ones with cowhide so my feet would stay dry.  There was no store bought dress, but three new dresses that mama and my two grandmothers made with materials from the general store.  No tea set, no boots, hat or gun were under the tree either.  The bicycle was not there nor the paper dolls or the Betsy McCall doll house.  but… there was a whole bag of root beer barrel candy, a new quilt for my bed that mama made, and sheet covering a large object at the very back of the tree.  Daddy told me to take the sheet off and there it was.  A doll house that looked just like our house.  It was beautiful and inside it were tiny pieces of furniture made from hickory sticks and popsicle sticks and some cotton balls that were wrapped with tiny pieces of fabric.  It was better than Betsy McCall’s dollhouse could ever hope to be.  Daddy and Uncle John secretly made it in Granddad’s workshop.
That Christmas Spirit of giving and love must have stirred some union and company hearts for on New Year’s Eve a deal was struck and people began to return to work.  Things began to be normal around our house and in the community.  Mama still rode the bus to work for a few months and then bought a used Chevy that daddy had to build a garage for because it was cold natured.  Daddy got a promotion to supervisor of the canning and shipping department and me… well I got a year older and finally got a beautiful blue J.C. Higgins bicycle from Sears on my 7th birthday.
As I look back at that Christmas from so long ago, I think of how magical it was.  Even in a time when there was no money to spare, people came together and shared what they had and it made a very special Christmas of simple things like fruit, nuts, little bookmarks, ordinary toys and crayons.  Most important to me was the tiny Bible.  I read it endlessly and believe it or not, after 60 years, I still have it and treasure it.