Spencer Rapone, a recent graduate of West Point, has promoted communism while in uniform. He raised his fist in a black power gesture, and wrote “communism will win” on the inside of his hat. He also wore a Che Guevara T-shirt under his uniform and has been promoting communism around the internet under the Twitter handle @punkproletarian. (Tweets are protected, and no longer visible) 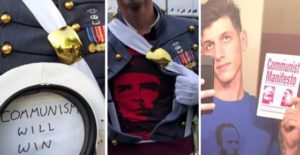 This wasn’t a very smart move, and the news got back to the right people. He’s under investigation.
His own father has denounced him:

“It’s my belief when he returned back from Afghanistan there was a notable difference in his political views,” the news organization quoted Rapone as posting. “Spenser is my son and I love him dearly, however, I do not like nor condone his politics, his actions or behavior.”

While everyone is quick to condemn him, I will cut him a little slack. He served in Afghanistan and perhaps his mind broke under the strain. Most likely he will be discharged from the military and could be facing military prison. That may be punishment enough. If he ceases his agitations, I will be content to leave it at that, rather than the half of a helicopter ride I usually would recommend.

Video: How Should We Then Live – Part 10

What Can I Do?